A Healthy Challenge: A Little Discouragement Goes A Long Way

I’ve been avoiding writing my healthy challenge update for a couple reasons. For one, my stats aren’t changing all that much. And two, it just really pisses me off when I don’t see the scale move to the left after I put in so much work!

Weight Watches teaches us to never focus on the number; but instead focus on the healthy progress you are making within yourself. And if you keep going at that great pace of getting healthy, soon enough, the scale will move in your favor. I hate to admit this because I swore I wouldn’t become this type of person, but I admit I have become a daily and nightly weigh-er. Ever since I lost the first 20 pounds, I’ve been obsessed with how much more I can make the scale move to give me those great numbers. But as my progress slowed down, and the scale barely moved to what felt like 1 pound every two weeks, the more discouraged I got.

Every morning and every night I would weigh myself only to see the scale stay the same or move one or two pounds to the left or to the right. And it completely discouraged me. I often felt like “Then what the hell am I doing all this for?” I know I’m supposed to be patient, but why does my mind think that even one day will make a difference on the scale? I can’t lose one pound a day! Even if I could, it wouldn’t be a healthy way to lose weight. I know it didn’t take me overnight to get to the weight I am at now, so why am I expecting it to come off so fast?

The frustration I feel every single time the scale doesn’t move overwhelms me and I tend to want to give up. This puts me on a yo-yo path with my Weight Watchers plan where I have good days and a lot of bad days. I stay stuck between gaining and losing one to five pounds and I’m sick of this teeter-totter. So as of last week’s weigh-in at my Weight Watchers meeting on Wednesday, I’ve decided not to look at my numbers on the scale for 15 days. Not at home or at my weekly meetings.  As much as I want to step on the scale every morning to see where I’m at, I’m not going to do it. I have been refraining myself so far and I have to admit I feel a little powerful knowing that as long as I don’t look at that number, I am the one who is in control and not the scale. I will be weighed again this Wednesday at my Weight Watchers meeting but I will ask the receptionist to not tell me the number, which they often comply with other members.

This is my attempt to see a significant difference in the changes I’m making in a significant amount of time.  Weighing myself every day at my home scale was driving me crazy because I was expecting unrealistic results. The more I would see the number stay the same, or barely move by one pound, the more I would want to head to the drive-thru feeling defeated at the fact that what I was doing wasn’t working. But I know it’s working because of what I’ve lost in the past. I took a look at my weight-loss chart Weight Watchers provides from the time I joined to the present and that’s all the proof I need to know that it works. It has its ups and downs, but most importantly it’s going down and that’s all that matters to me. Obviously there is some sort of success in all my attempts. I just have to learn to be patient. And I’m learning to be patient by not letting the numbers on the scale control me. I will control it. And I will only look at the numbers twice a month; which is huge because I literally looked every single damn day! 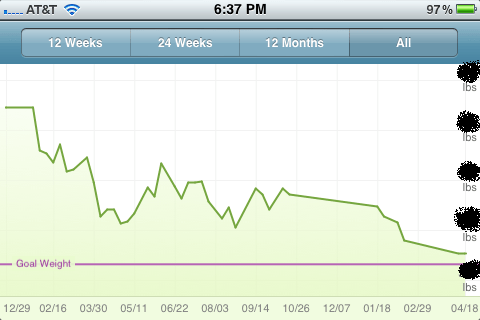 Adding to my “don’t look at the scale everyday” challenge is a new workout plan I stumbled upon while searching for tips on strength training. RealBeauty.com offers a free 90 day workout plan from beginning to end. I’ve just started week three and I feel the difference in all my sore muscles from these new fitness workouts that are new to my body. I’m excited that I’ve been able to do all of it so far, but am a little afraid of what’s coming up next. In week five, my cardio session is supposed to kick up but I can barely get through week two’s cardio session. All I can do is try and hope my body is able to keep up.

In my next update, I’m hoping to present a change in my numbers. But until then, here’s a hilarious video you will enjoy by Jenna Marbles from her You Tube channel that describes how I gained pretty much all of my weight, aside from other personal issues. If there’s anything great Weight Watchers has taught me, it’s that you don’t have to wait until tomorrow to start getting healthy. You can start today. See ya in 15 days!!

Beginning Weight: I’ll tell ya once I lose 50lbs!

This entry was posted in Uncategorized. Bookmark the permalink.