I remember the exact moment my older sister Carmen asked me if I would consider having the gastric bypass surgery to lose weight. It was about five years ago. She was visiting from our home town while I was living in San Marcos, CA still attending college and I had just gotten back from walking at my favorite beach near my job site in Carlsbad, which was my usual exercise routine. I was still trying to lose weight and starting fresh for the umpteenth time. When she asked if I have ever thought about having the gastric bypass, it felt like it came out of her mouth in very slow motion. “Chena, have you thought about the gastric bypass surgery to lose weight?” (Chena is a family nickname given to me). My heart started racing and I tried my best not to react. I had been dreading anyone in my family asking me this question because I took it as a sign that they had given up on me. It felt like she had grown tired of my attempts to lose weight on my own and that my only way to do it was to have the surgery.

I knew she didn’t mean any harm in her asking me this and she never knew how I felt about it, but I couldn’t help but get upset. If she would have known that it would upset me, I’m sure she wouldn’t have asked me. I know my family cares and loves me and they would really like to see me at a healthy weight. So would I. But ever since I first heard of the surgery, I knew that this is not the way I wanted to lose all my weight. My baby sister Vanessa, who was in the living room and heard Carmen ask me this question, knew how I felt about the whole situation and how sensitive I was to anyone in our family asking me this. I have a closer relationship with Vanessa because we’re closer in age and I often trust her with a lot of the private things we talk about. I casually replied with “Ummm….yea but I don’t think I would ever do it. I’m gonna go shower now. I got all sweaty and stinky from my walk.” I walked to my bedroom, shut the door, and took in deep breaths. A couple of minutes later, I hear a knock on my door. It was Vanessa coming to check on me if I was ok. She knew it had really upset me.

Over the years and several failed attempts to lose weight without diet pills or even considering the gastric bypass, I became less offended when more people in my family asked about me getting the surgery done. I was actually quick to answer “If doctors are going to cut my stomach down to the size of an egg to lose weight, then they better do the same to my brain because my stomach isn’t the problem.” I know and understand that my battle with food is completely mental. My stomach has nothing to do with it. How is this surgery going to save me from still wanting to overeat even after I get full from eating a few grapes? I refuse to be forced to lose weight. I want to be able to conquer this constant battle without having to make such a big sacrifice. However, the ironic thing is that my weight gain to my unhealthy body is the sacrifice I’d rather deal with in trying to lose it without the surgery. And I definitely feel this sacrifice every single day when I wake up, when I exercise, when I’m hungry and craving greasy foods. For the first time in my 28 years of life, I am more aware now of how this heavy weight on me really affects my body. But I’m learning about myself. I haven’t told many, but I’m seeing a therapist to hopefully find the answers within me as to why I had continued to eat the way I ate for so long. I’m learning more about myself now than what I thought I already knew.

I’m not completely against the surgery. I think it’s great that it’s able to save people’s lives. Just because I refuse to do it, doesn’t mean that I belittle the next person who gets it done. It’s a completely personal choice and I’m sure that making the decision to have the surgery weighs heavily upon the person that decides this is what’s best for them. It is what’s best for them. But it’s not what I feel is best for me. I have been told by family members, doctors and nurses that I could easily qualify for the surgery and that I should take advantage of the fact that my health insurance is probably going to cover it. Do you know how hard it is to constantly hear that? Do you know how hard it is to not roll my eyes and turn the other cheek but instead smile and say “Yea, I know. Still thinking about it”?

I truly am grateful for what the surgery can do for others and for what it has done for my sister Carmen. She decided that having the gastric bypass was best for her and eventually had it done. I supported her, and even went to the presentation her doctor had for his future patients who were about to have the surgery. She was able to lose weight and get healthy enough to conceive naturally and gave birth to a beautiful healthy baby girl. Becoming a mother is a role that was destined for her, but came at a tragic price after suffering multiple miscarriages. Without a doubt, the surgery was a huge factor in her being able to get pregnant naturally. This is what was best for her. And I am beyond grateful and thankful that she and her husband are now able to enjoy being wonderful parents. 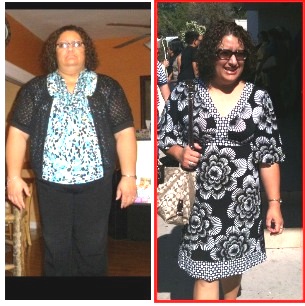 My sister Carmen before and after the gastric bypass surgery 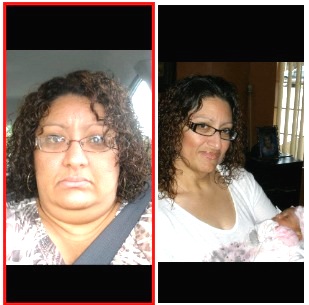 If there ever comes a time in my life where I feel it is best for me to have the surgery to lose this weight, then that’s when I’ll know it is the best thing for me to do. But for now I’m learning about myself, discovering why I am the way I am and fighting how to control myself. Even if the scale goes down two pounds one week and goes up one pound the next week, I will continue on. I may not see a big difference in the number the scale displays, but I feel a difference with my body during my exercises. Walking faster and longer, having more energy, keeping up with my Zumba classes a lot better than my first week is all proof that I’m improving. And it’s only a matter of time before the scale shows me I’m doing everything right.

Before I know it, I’ll reveal that starting weight number that I am so embarrassed to display. But until then, I’ve got 21 more pounds to go before I reveal it. See you in two weeks!

Current Weight: That’s between me, my scale, and Weight Watchers!

This entry was posted in A Healthy Challenge©, Body Positivity. Bookmark the permalink.

One Response to A Healthy Challenge: The Gastric Bypass Surgery