Adventures in the Kitchen, aka I’m a Real Adult Now

Baked, stuffed tomatoes with sausage and rice, pasta with homemade parmesan and romano cream sauce, steamed peas, and a double-chocolate brownie cake with powdered sugar and whipped cream to top it off. If your mouth isn’t watering right now, I can only assume one of two things: 1) you’re vegetarian or vegan, and found the sausage to be highly off-putting or 2) you are a crazy person. The best part of that delicious menu? I successfully cooked the entire thing last night for my family, without burning down the kitchen, setting my hair on fire, or cooking anything to a blackened crisp (apparently most of my kitchen-related fears involve fire). 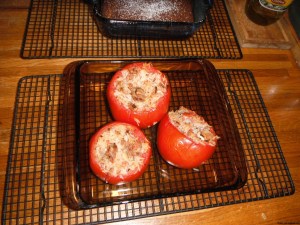 I decided arbitrarily that cooking and executing an entire meal by myself makes me a real adult. Not the going to college, living on my own, having a job, or filling out tax paperwork; definitely the ability to cook a tasty meal for more than one person that didn’t involve defrosting the meal and microwaving it into submission.

My kitchen adventures have always been limited to following my mother around and bugging her to give me a snack (although now that I’m twenty, I don’t do that so much anymore) and baking the occasional tray of brownies or cookies if I was feeling particularly kitchen-savvy. I threw a dinner party for my friends once in high school—we sat around in formalwear drinking sparkling cider out of wine glasses and chatting about prom and our calculus homework. Yes, I was super cool in high school. But the actual dinner for the dinner party was made under the hawkish eye of my mother, a chef so talented she nearly made a career out of it. She helped me pound the chicken breasts and mash the potatoes and do that gross thing where you stick your hands in egg yolk and breadcrumbs to prepare the meat for the oven. So I don’t really count that as an independent cooking experience.

This, on the other hand, felt real. Not that I’m about to embark on a career of domestic bliss in the kitchen, but after four hours (not including grocery shopping) spent sweating in my kitchen, I feel like I finally have an appreciation for both how difficult and how rewarding preparing a meal from scratch is, especially when you get to offer the completed product to your family at the end of the day. 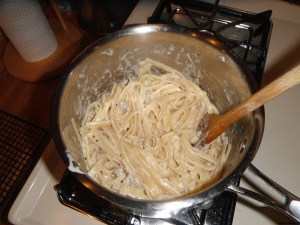 There’s a huge amount of responsibility involved in cooking—responsibility that goes beyond the basic task of making something edible and not cutting your fingers off in the process of chopping an onion. Not only are you often keeping your eye on five or six different things at once (including active burners, which is a wee bit stressful), but you’re also tasked with the job of going beyond the edible and into the realm of something that people will actually enjoy. Or, alternatively, something that you won’t mind eating in its entirety in case your audience can’t stomach the product.

I love acquiring life skills, and I feel like I’ve just acquired a big one—the ability to really go beyond the edible. Maybe that’s setting the bar too low, but I’m pretty proud.

What about you, readers? Do you like to cook? When did you feel like you were an adult?

To learn all about me, see this post I wrote as an introduction to being a new contributor for QueerieBradshaw.com: http://www.queeriebradshaw.com/introducing-alanna-lafemme-our-latest-contributor-addition/
View all posts by AlannaLaFemme →
This entry was posted in Dining In, Essays, Gluttony and tagged adulthood, cooking, dining in, food, kitchen. Bookmark the permalink.