In direct contrast to New York gay pride revelers, our Sin WIN! recipients of last week, we award our Sin FAIL! of the week to the NY gay marriage protestors, for a boring display of bigotry.

Every picture I’ve seen shows people just standing there, barely holding up signs and the NY Times even ran an article on how boring they are. I mean, really, where’s your sense of anger, frustration and out-right rage at the government for taking away your God-given right to keep others from having government-given rights?

This kid about sums it all up: 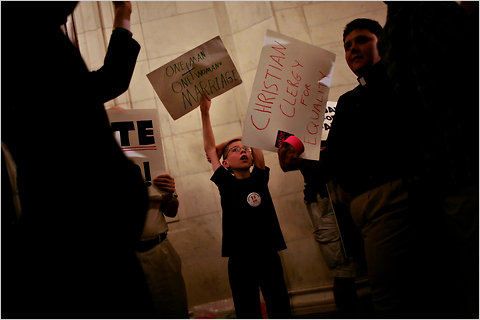 In related news, to show his support for the lack luster protestors, Archbishop Dolan called into a radio talk show on Friday and called gay marriage an ominous threat, emphasizing his point by making these “ooga-booga” hand gestures while attempting to cup the breasts of a young reporter. (*or so this picture seems)

Lauren Marie Fleming is a writer, speaker and motivator known for her intimate, informative and often hilarious look at sex, relationships and body-image. Lauren runs the critically-acclaimed QueerieBradshaw.com blog, writes for major news sources including VICE, Nerve, Huffington Post and Curve, and is the author of her memoir Losing It: My Life as a Sex Blogger. In 2013, Lauren founded Frisky Feminist Press (FriskyFeminist.com) as a way to enhance conversations about sexuality through educational guides, online classes and entertaining publications. A law school graduate, Lauren has spoken all over the United States and is internationally recognized for her dynamic, engaging style. In everything she does, Lauren’s goal is to educate, remove stigmas and encourage people to achieve their desires.
View all posts by Queerie Bradshaw →
This entry was posted in Sin FAIL! and tagged marriage, New York, protest, same sex marriage. Bookmark the permalink.