So as we all heard yesterday Anderson Cooper made an official announcement that he is in fact gay. Of course we all knew that already and I think an announcement probably wasn’t necessary, but more power to him for finally putting it out there.

I think the first time I saw Anderson Cooper on television was probably on the Oprah show.  It was love at first sight. Ever since then, I’ve had a reoccurring fantasy of him. Gay or straight, he belonged to me – well, in my fantasy, at least.

When I got into writing and reporting for my university newspaper, I used to think about what it’d be like to be a foreign correspondent for CNN or The New York Times. I would imagine working abroad, covering important stories and exposing the truth of corrupt countries. And in this imaginary world of mine, I’d run into the incredibly sexy Anderson Cooper. Or, Andy, as I would call him. He’d be on a similar assignment covering world news and we’d bond over the fact that we’re both journalists. Sparks would fly, and not because of gun fire in the foreign country we’d be in, but because he’d fall madly in love with me. 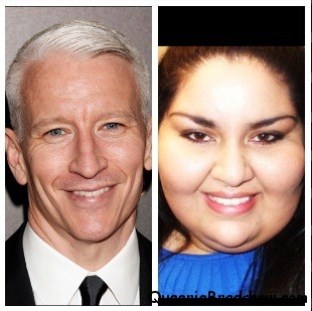 Admit it! We look cute together!

The next part of my fantasy (and I know this sounds extremely ridiculous – but that’s why it’s my fantasy) we’d be on the Oprah show sharing our love story of how we met and show photos of our wedding. We’d become this powerful journalistic couple that put our lives in danger for the sole purpose of reporting the truth! But wait, it gets better! In the middle of our interview with Oprah, our silver-haired, two-year-old son walks up on stage raising his arms up for us to grab him. Yup! We were a happy, silver-haired family. Well, except for me because I’m brunette, but still very happy sharing our story with Oprah and her audience. (Sigh).

And after this announcement he just made, I will probably still continue to fantasize about him. I can’t help myself. He’s just so damn gorgeous! Anderson Cooper, if you ever read this, call me maybe!