Facebook Now Allows Custom Gender and “They” As a Pronoun, a.k.a. I’m About to Confuse the Hell Out of People in My Hometown

Posted on February 14, 2014 by Queerie Bradshaw

Alex just squealed “OH MY GOD” and ran over to me, showing me a Transgender Law Center post on Facebook about how to change the gender titles you use on Facebook.

“It’s about fucking time,” I said, breaking my sabbatical from Facebook to change my gender from “female” to “non-binary” (“femme” was not an option) and my pronouns from “she” to “they.” I don’t really care if someone calls me she, or they, or “hey you” even, but I try to use gender neutrality as much as possible to help make it a commonplace occurrence. 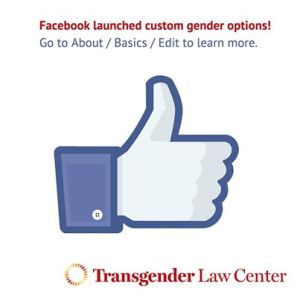 Facebook says it allows you to customize your gender, but really, it limits what you can and can’t use to about 50 preselected gender options, and it only lets you choose from “she”, “he” and “they” for pronouns. Here’s what happened when I tried to make my gender “Femme”.

While Facebook is a bit behind Google Plus, which launched with a third gender option, it is still really spectacular to have the ability to choose your gender beyond the binary.

“There’s going to be a lot of people for whom this is going to mean nothing, but for the few it does impact, it means the world,” Facebook software engineer Brielle Harrison, who worked on the project, told the Associated Press.

Thanks Facebook. I’m still not using you for a year, but I appreciate the public recognition that gender is beyond binary.

To learn how to change your Facebook status to something custom (I suggest ALL people, even cis-gender people, do this in solidarity), check out this post by FB.

To learn more about how not to be a jerk when it comes to talking about someone’s gender, check out this post I did for Kinkly.

Lauren Marie Fleming is a writer, speaker and motivator known for her intimate, informative and often hilarious look at sex, relationships and body-image. Lauren runs the critically-acclaimed QueerieBradshaw.com blog, writes for major news sources including VICE, Nerve, Huffington Post and Curve, and is the author of her memoir Losing It: My Life as a Sex Blogger. In 2013, Lauren founded Frisky Feminist Press (FriskyFeminist.com) as a way to enhance conversations about sexuality through educational guides, online classes and entertaining publications. A law school graduate, Lauren has spoken all over the United States and is internationally recognized for her dynamic, engaging style. In everything she does, Lauren’s goal is to educate, remove stigmas and encourage people to achieve their desires.
View all posts by Queerie Bradshaw →
This entry was posted in Announcements, Headline, LGBT/Queer Politics and tagged facebook, gender, non-binary, queer, social change, social media. Bookmark the permalink.