Five Facts I Love About the Clitoris a.k.a. Happy National Clitoris Day!

Today is National Clitoris Day or as we call it at my house, Thursday.

I have no idea why today is the day to celebrate the clitoris, but I’m glad this wonderful organ is getting the recognition it deserves, if only by me. A quick Google search shows that while a group of places celebrate Clitoris Awareness Week in May, I seem to be the only person who celebrates National Clitoris Day on March 20, so there’s a chance I made this up years ago when I wrote my first National Clitoris Day article.

No, I’m quite positive I read it somewhere and that’s what sparked the article. Maybe it was something going around on MySpace. Yes, MySpace, that is how long I’ve been celebrating this glorious day.

I have no facts or sources or clues as to why, years ago, I put in my calendar a reminder that today is National Clitoris Day, but there it is, beeping at me, reminding me to write a post about clits.

I’ve celebrated National Clitoris Day on this site in a various ways. One year, I wrote about how cocks helped me figure out clits, one year I gave away Moregasm and Sex Toys 101, two of my favorite sex ed books, and this year, I’m giving away the most important thing you could ever have in your life: information.

Top 5 Things You Should Know About the Clitoris:

1. It is the reigning sensory organ.

The Clitoris has 8,000 nerve endings and affects over 50,000 nerves all over the body when stimulated. To put that in perspective, the penis – it’s closest competition for nerve endings in one place in the human body – has 4,000.

2. It is the same organ as the penis.

The clitoris and the penis are the same organ, just shaped differently. For an interesting read, check out this Wikipedia article on the formation and structure of the clitoris.

3. The clit is larger than you see.

The clit looks like a wish bone, with only the tip hanging out where we can see it. There are two “legs” to the clit that go along your labia and can be massaged or stimulated during penetration. 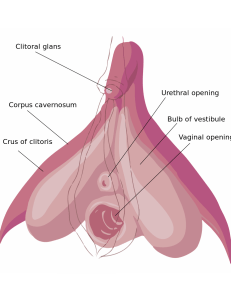 It’s like we got our wish come true. (image via Wikipedia)

4. The clit is selective in where it appears.

Did you know that the clitoris is only found in mammals, ostriches and only a select few other animals? I’m glad I’m one of the chosen.

5. It comes in varying sizes, shapes and styles, and can appear in various ways on various genders.

Like your labia, there is no one way for your clit to look, and I’ve seen clits of all different shapes, colors, styles and sizes in my life, including one that had freckles!

Most often, we see medical facts about the clitoris as it is found on the average body of a cis-woman – someone identified as female at birth who still considers themselves female. But I think it’s important to remember that there is no real “average” when it comes to sex or gender because they are such varying and fluid things.

For some varying views on the clit, check out a trans* woman’s perspective on hers, an intersex person’s comment on mourning the loss of theirs, and this article on what terms can be more comfortable for genderqueer and trans* men to use instead to describe their genitalia.

What are some of your favorite facts about the clitoris?

Lauren Marie Fleming is a writer, speaker and motivator known for her intimate, informative and often hilarious look at sex, relationships and body-image. Lauren runs the critically-acclaimed QueerieBradshaw.com blog, writes for major news sources including VICE, Nerve, Huffington Post and Curve, and is the author of her memoir Losing It: My Life as a Sex Blogger. In 2013, Lauren founded Frisky Feminist Press (FriskyFeminist.com) as a way to enhance conversations about sexuality through educational guides, online classes and entertaining publications. A law school graduate, Lauren has spoken all over the United States and is internationally recognized for her dynamic, engaging style. In everything she does, Lauren’s goal is to educate, remove stigmas and encourage people to achieve their desires.
View all posts by Queerie Bradshaw →
This entry was posted in Sex, Stuff We Love and tagged clitoris, clits, facts, information, National Clitoris Day, sex facts. Bookmark the permalink.

2 Responses to Five Facts I Love About the Clitoris a.k.a. Happy National Clitoris Day!