The youngest addition of my family turned one last week, right about the time I moved back to Oregon. This day marks the one year anniversary of her birth, which was a frightfully early and dangerous one involving copious bleeding by my sister and a fear we’d lose them both. It also marks the beginning of a year full of heartache, a year that changed me and my family in ways I have yet to begin to understand.

About a month after Baby Z was born, I got a phone call from my mother who was still living with my sister to help in her recovery. I heard tears, a muffled sobbing of “I thought I could do this” and soon my sisters’ voice replaced my mothers’ and announced the awful news: my brother had cancer. That persistent bump on his tongue that we joked was herpes was worse than we ever imagined.

My sister and Baby Z were barely home from the hospital before my brother was in it. The day after my last final, I flew down to San Francisco to be with my sister, her toddler and her newborn. The frailty of my little niece, born five weeks early and most definitely the smallest human being I have ever held, was only surpassed by the frailty of my sister. In her eyes I saw the pain of almost losing a child doubled by the fear of potentially losing a brother then tripled by the pure exhaustion of new motherhood and having moved to a new city only a month before.

I had no idea how she was still standing. 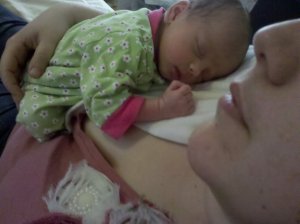 Holding Baby Z. Curled up, she was smaller than my breast.

Hell I had no idea how any of us were still standing. My brother lost an eighth of his tongue that day and my sister and I gained about 10 pounds in grief cupcakes, but we all made it through.

A few weeks later was my law school graduation and my mother, father, two aunts, grandparents and close friends came up to celebrate with me. We had a great Thai feast on Friday night and reveled in the happiness of good food and family. The next morning, when I heard sirens pull up to my hotel, I knew instantly they were here for my grandfather. He was old and frail and had trouble walking, so I thought for sure he had slipped and hurt a hip. Lying in bed with D.E., I braced myself for the inevitable knock on the door. Sure enough, it came, but my mother brought news not of a fall by my grandfather like I had expected but of a brain bleed in my grandmother’s head.

I made it through the graduation ceremony in a daze and skipped the reception after, opting instead to go to the hospital to visit my grandmother. In the last fully conscious conversation I would ever have with her, she insisted we all go on to my party and have a great time, so we did.

That evening she suffered another blood clot causing stroke in her brain. Over the next ten days I held her hand, stroked her face, sang to her and kept her company as she slowly faded away from this world. The beauty of the moment of her passing was a surreal story I’ll have to share another time, but if you’ve got to go, Gramma picked the right way to do it.

The next couple months were filled with funerals and services, I visited my grandfather for two weeks to paint with him, his favorite hobby, and spent some time in my hometown with my family. By the time all of that was done, my brother was ready for another treatment, this time an experimental one where they inject radiation directly into his tongue. It all went well and for about a month or two afterwards things seemed like they were going to turn out ok.

Then his cancer moved to his lymph nodes.

I knew immediately that I wanted to be home. I had spent most of my time the past five months flying home anyways, I might as well move there for awhile. So, around the first of November, I packed up all my things, put them into storage and drove the 1400 miles from my home in Portland, Oregon to my hometown of Brawley, California.

Once I got there, it became apparent that there wasn’t much I could do but wait, just like I had been doing in Portland, but it felt good to wait with my family. I made my brother soup, drove him to chemotherapy, helped him shave his head and applied lotion to his back during radiation. I painted with my grandfather, trying to keep his spirits up, and helped my parents organize their house. I saved money and worked as a freelancer and consultant. I went to China for three weeks with D.E. and flew out to the East Coast to speak at Brown and visit friends.

But while it felt like I was dealing with everything at that time, I know I actually dealt with nothing. I was like a doctor in a war zone, triaging the issues as they came to me and pasting the gaping holes in my heart together with super glue. Before I left Portland I was doing Bikram yoga every day, now I barely went for walks. I quit meditating, quit thinking about the challenge I had given myself to be healthy, quit taking care of myself all together. I even broke up with my loving partner D.E., unable to handle any kind of emotional issues. I had no routine, no real support network, no way to process what had happened, and was still happening, in my life. I shut down emotionally and refused to even cry, instead I just pushed through without actually moving on.

Then my brother bought a house.

My younger brother, the guy with cancer, the guy this was all happening to, bought a house. And an amazing one at that. He was doing everything he could to normalize his life through this period, finding ways to keep himself headed on the track he had planned. It was time I follow his lead and do the same.

So, a year to the week after my little niece was scarily thrust into this world, beginning a year of hospital hell for my family, I moved back to Eugene, Oregon. I thought about New York City. I thought about Washington, D.C and San Francisco. I thought about Portland and Seattle too. But after this year, I needed healing, and no place has been as warm and welcoming as Eugene has been to me. Here I am surrounded by friends that are practically family and there’s just enough to do that I’m not bored but not so much to do that I can distract myself from processing what I’ve been through.

This constant heartache and I have been together for a year now, so today’s an anniversary of sorts. I’m celebrating by recognizing its existence and not apologizing for the relationship that we have together.

One of my best friends always tells me “be strong, and by that I mean fall apart whenever you need to.” I’ve stood strong this past year, carrying my heartache like a heavy burden, unwilling to let it show for fear of falling apart. But it’s been a year and it’s time to fall apart. It’s time to build a nest and find support again. It’s time to heal.

My anniversary gift to myself is giving me permission to do just that. Because it’s been a year of heartache and that’s long enough. Now it’s time to fall apart, pick up the pieces and rebuild my life.

Lauren Marie Fleming is a writer, speaker and motivator known for her intimate, informative and often hilarious look at sex, relationships and body-image. Lauren runs the critically-acclaimed QueerieBradshaw.com blog, writes for major news sources including VICE, Nerve, Huffington Post and Curve, and is the author of her memoir Losing It: My Life as a Sex Blogger. In 2013, Lauren founded Frisky Feminist Press (FriskyFeminist.com) as a way to enhance conversations about sexuality through educational guides, online classes and entertaining publications. A law school graduate, Lauren has spoken all over the United States and is internationally recognized for her dynamic, engaging style. In everything she does, Lauren’s goal is to educate, remove stigmas and encourage people to achieve their desires.
View all posts by Queerie Bradshaw →
This entry was posted in Essays, Featured, Headline, Off Our Chests and tagged cancer, Family, life, personal, personal story. Bookmark the permalink.