A Healthy Challenge: An Understanding

Let’s face it; if losing weight, eating healthy and exercising regularly was easy, then more than half of the U.S.population wouldn’t be obese. I’ve often wondered too many times how it must be like for a thin person to never have to worry about being overweight, never worry about gaining after a night of pizza, or if he/she really does make a conscious effort to stay healthy.  What about the thin people who say they literally eat whatever they want and never gain anything?! Why can’t we all be made like that?! Is there a secret switch in my body I haven’t found that would allow me to be that way?! Because if there is, I would really like to find it!

I can’t even begin to describe the mental battle one goes through in trying to change from a fatty fast foods and sedentary lifestyle to healthy lean protein, whole grains, fruits, vegetables and being physically active. It’s not that I don’t like healthy food. I actually really like it. But it leaves this unsatisfying feeling in my head, not in my stomach, that I would feel so much better if I just went out and got fast food instead. Eating healthy foods, like the ones I just mentioned, physically leaves a satisfying feeling for my stomach. However, it’s my brain that tells me to go for the fast food and the pizzas and the starchy fatty foods.

There’s a sick connection and crave from my brain to the fatty foods that can only be satisfied when I actually eat them. And if I don’t eat what I’m actually craving, I get restless and feel so hopeless at times. The only thing that can calm down what sometimes feels like anxiety is a quick trip to the drive thru. It’s crazy to say this and it may make no sense whatsoever, but when I eat very healthy and exercise for a good few days, maybe up to a couple of weeks, I feel like I’m missing out on something. I’m missing out on the things that personally satisfied me and made me feel complete. It’s horrifying to know and admit I even feel this way because it makes me feel like I’m some sort of sick and twisted person who cannot let go of my dependency of fatty foods. Am I addicted? I probably am. Although I’ve never wanted to admit such a thing, I think that’s the core of my struggle. But I’m fighting to take control and not let it take over, before I lose control and it takes over me.

I think there are several reasons and past experiences in my life I went through that may have contributed to my weight gain and dependency on food.  If I had committed to losing weight and being active in high school during my lighter days, I fully believe I could have done it.  But I was happy the size I was at that time. Well, not completely happy, but satisfied to say the least.

As I got older and more independent, I did whatever I wanted to and went for fast food at two o’clock in the morning because nobody said I shouldn’t or was there to judge my actions. But I’m pretty sure I would have done it either way. My personal reasons and past experiences in my life that relate to my weight gain are far too deep to dissect at the current moment. But I am fighting for myself. More than I have ever fought before. I’ll take a two pound gain and work it right back off any day rather than a 20 pound gain that would eventually turn into way more.

With my added physical activities of Zumba and hiking to go along with my walking, I’m feeling more hopeful than ever. I feel a difference in my tolerance for exercise. The first week was awful and I wanted to quit because I felt like passing out right after each workout. But now I feel energized and ready to do it again the next day. 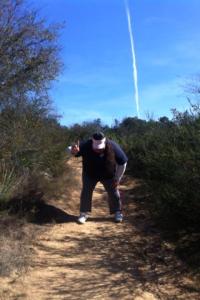 Catching my breath while on a tiresome and steep hike!

Before I close this write-up, I wanted to share an article I found on Yahoo about a personal trainer who purposely became obese to get a better understanding on how difficult it is to lose weight. His name is Drew Manning and his goal was to gain weight for six months eating nothing but junk food and completely stop exercising. Which was pretty much just like me for the past eight years with a few attempts to lose weight here and there but always failed. He would then spend the next six months trying to get the weight back off.  He was asked what he has learned so far and his answer to this question connects so deeply with me and probably the rest of the obese population: “I think the biggest thing I’ve learned is how intense and how real these food cravings are. I think a lot of people associate the word “addiction” with drugs and alcohol, but I do believe this addiction (to America’s processed foods) is real and very similar. I know I’ll never know exactly what it’s like for every person that’s overweight and I don’t claim to, but at least I understand better than I did before when I never had to struggle with this.”

See you in two weeks.

Beginning Weight: 22 more pounds to lose and I’ll tell ya!

One Response to A Healthy Challenge: An Understanding