Once upon a time, I almost convinced myself I was straight—because I wasn’t attracted to girly girls. 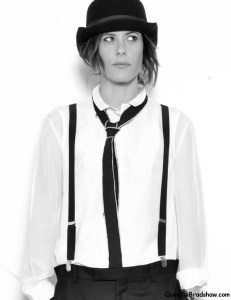 There’s a skeptical look for you. (via Queermasculinity.tumblr.com)

Here’s the truth of it: I couldn’t care less what’s in somebody’s pants (or shirt, or whatever). The characteristics to which I’m attracted can present in people who identify strictly as women, strictly as men, strictly as neither, or as some combination of the two. What I am attracted to, on a large scale, is boyish masculinity. It took me a while to figure out that being attracted to boyish presentation didn’t just mean I liked boys. Yes, I like boys…but I also like bois.

The attraction to physical, outward boyish presentation is what I won’t really try to explain. For men, I guess maybe I find boyishness less hegemonic and thus more appealing than typical “manliness”—similarly, for women, boyishness messes with the expectation and status quo of womanhood on its face, and I’ve always enjoyed the company of people who mess with expectations. But it’s the psychological/social aspects of boyishness that I really find more appealing.

What really gets me is the awkward charm—the sense that flirtation doesn’t quite come naturally, and that sexual interactions (while completely desired) are unexpected and thus even more awesome than they would be otherwise. Boyish folk, in my experience, don’t enter an interaction expecting to get laid. It’s not quite insecurity, but rather an overall extra sense of gratitude for everything that is given. I love that, and how it makes interaction seem deeply genuine even if it’s just a bit of flirting. “Boyish” works because it conveys that youthful sense of wonder and gratitude for sexual and romantic fulfillment.

Jamie Campbell Bower is TOO adorable. (via Imgfave)

I’m sure I could psychoanalyze myself further, but I’ll leave it at that: I fall head over heels for awkward, genuine people with a boyishly masculine self-presentation. Most of the time, anyway.

The funny thing is that coming to terms with my queerness and my attraction to boyishness has opened a space for me to be even less concerned with gender than I was before. By recognizing that boyishness goes beyond physical gender presentation and into the realm of personality and social self-presentation, I’ve given myself room to be seriously attracted to people of all gender presentations, including femme folk of all levels of femme-ininity (still different from the hetero girly girls I once wondered about).

To learn all about me, see this post I wrote as an introduction to being a new contributor for QueerieBradshaw.com: http://www.queeriebradshaw.com/introducing-alanna-lafemme-our-latest-contributor-addition/
View all posts by AlannaLaFemme →
This entry was posted in Confessions, Essays, Featured and tagged attraction, bisexual, bois, featured, pansexual, Sexuality. Bookmark the permalink.