I Still Have Shame About Sex and I Hate It

I hate that I still have shame about sex.

When I was thirteen, I went to see The Truth About Cats & Dogs with my family at the newly renovated, state-of-the-art theater two towns over. The verdict afterwards was unanimous: the movie had been ruined by the phone sex scene. 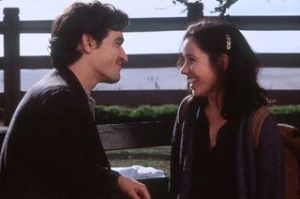 I love when she jokes in the end that she got pregnant from the phone sex.

“An unnecessary ploy to get people in the seats,” determined my father.

Me? I just nodded my head in agreement. They were right, of course, the scene was not needed. We could have gone the whole movie without seeing Janeane Garafolo jerk off to Ben Chaplin’s voice and it wouldn’t really have made a difference in the plotline.

So why did I love it so much?

The long sequence involving phone sex between Brian and the real Abby turns out to be one of the more successful love scenes in recent memory, because the actors play it so affectingly and because it lets Ms. Garofalo end the film with yet another memorable zinger.

I loved it because it was real. It was something I would have done, something I had already done at 13. By 13 I was being felt up by the boys at school. By 13 I had touched a penis. By 13 I was dreaming of having sex with women.

That night, I called a guy friend to talk dirty to me on the phone. I touched myself while he did and came but didn’t tell him that. I didn’t tell anyone that I masturbated almost nightly. I couldn’t admit to the sexual fantasies that constantly played in my mind.  I wasn’t ready to be that scandalous.

I wasn’t ready to be ostracized. 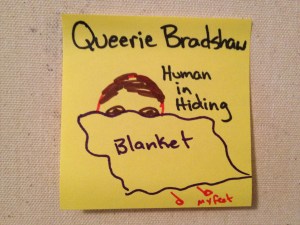 “Don’t make yourself one of those career lesbians,” my dad advised me years later after I got my position as an editorial assistant with Curve magazine. ” You don’t want to be pigeonholed into being just that.”

He said this as if lesbian was a skill set, not an identity.

This all makes my dad sound like a prick. He’s not. He’s quite a loving and generous man actually. He’s just old-fashioned. He’s lived his life in one little town. A place that can be quite judgmental. A place he tried to protect me from by encouraging me to fit in as much as possible, stand out a little less, conform just a bit more.

Once, right after I came out to him, my dad was out at our small town country club bar and the guys were talking about Brokeback Mountain, gay bashing someone in some way and he didn’t know what to do, what to say, now that his daughter was one of those gays.

Years later when Proposition 8 was on the ballot in California and all his good ol’ boy farmer friends were debating gay rights, he stood up and reminded them that they all believed in small government that doesn’t encroach on your life and that voting to ban gay marriage was the biggest encroachment any of them could make into his daughter’s life. 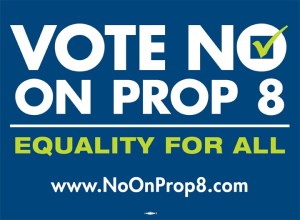 My mother told me both of these stories. My dad would not see why such stories needed to be shared.

My father was passionate but he was never much for activism. Once, a group of farmers from my county hauled their tractors all the way to LA to drive them down crowded Wilshire Blvd. to protest a proposed farm bill. My uncle orchestrated it and my parents went along. I remember seeing pictures of them as a kid and wishing I had been there with them, bullhorn in hand, yelling my protestation at the top of my lungs.

But me, I was always protesting something. I was always an advocate, always pushing the status-quo, always questioning authority. I get that from my mother. My father, he’s more of the go with the flow, don’t rock the boat type.

Now I’m afraid that censorship has made its way into my subconscious. 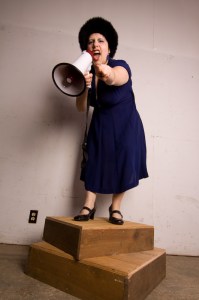 There is a chapter in my memoir about having seedy sex in a cheap motel, a story that was popular when it first was told on Curve magazine’s website, a story I used as a sample chapter for my book proposal. It missed something though, when I first wrote it. It felt barren, boring even. I sent it to an editor for help and she, not so subtly pointed out the glaringly obvious thing the scene was missing: sex.

I wrote a sex scene without writing about the sex.

My problem is, I’ve done what my dad always did. I’ve made the horrific assumption that the two are not related. I’ve written my book as if emotions and sex were two separate things I talk about at two separate times.

And shit, I think I’ve lived my life this way as well.

I think I am ashamed of my sexuality.

I think I am ashamed that I write about sex.

I think I am ashamed that I like sex.

How could I not be? We live in a culture that puts a price tag on women for how desirable they are, then bankrupt them for having desire. 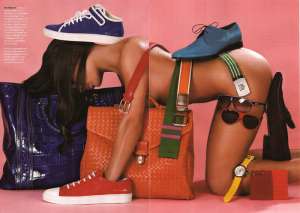 I want to end this piece with the answer to it all. I want to tell you that I’ve overcome this fear of being ostracized for sex, give you a step-by-step guide on how to do it yourself, but the only answer I know is that if you keep talking about it, it gets less scary.

So that’s why I keep writing. That’s why I encourage others to keep writing. I have this dream that one day, if we talk about sex enough, it will be normalized and that stigma will go away and we’ll stop treating something this great as something shameful.

When I start to feel shame, when others put their issues with sex on me, I remember that dream and keep talking.

And I’m very glad you all are still listening.

Lauren Marie Fleming is a writer, speaker and motivator known for her intimate, informative and often hilarious look at sex, relationships and body-image. Lauren runs the critically-acclaimed QueerieBradshaw.com blog, writes for major news sources including VICE, Nerve, Huffington Post and Curve, and is the author of her memoir Losing It: My Life as a Sex Blogger. In 2013, Lauren founded Frisky Feminist Press (FriskyFeminist.com) as a way to enhance conversations about sexuality through educational guides, online classes and entertaining publications. A law school graduate, Lauren has spoken all over the United States and is internationally recognized for her dynamic, engaging style. In everything she does, Lauren’s goal is to educate, remove stigmas and encourage people to achieve their desires.
View all posts by Queerie Bradshaw →
This entry was posted in BDSM/kink, Confessions, Essays, Featured, Headline, LGBT/Queer Politics, Off Our Chests, Personal, Politics, Queerie Bradshaw, Sex and tagged advice, body image, fear, featured, feminism, gay, lesbian, queer, relationships, Sex, sex writing, shame. Bookmark the permalink.