“I’m Queer, I Swear” Tattoo, a.k.a. Will Someone in this Damn Coffee Shop Just Hit on Me Already

One of the reasons I’m so out and proud and boisterous about being a big ol’ queerbo is that people always assume I’m straight. Even gay people.
Once, while working Long Beach Pride for Curve Magazine, I got asked by a patron “why is a straight girl like you selling a lesbian magazine.” I was holding my girlfriend’s hand at the time. I think we even kissed in front of her. I was also wearing an adorable cherry print vintage-style dress and rockabilly inspired make-up, which, to me at least, screams lesbian. 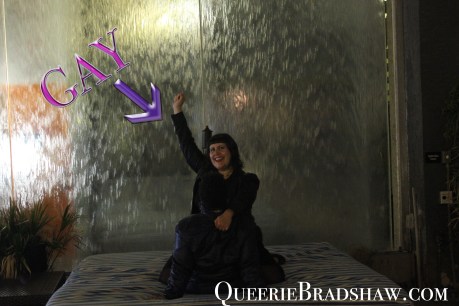 But that’s the thing, while I know how to spot a femme-dyke from miles away, a lot of people assume that if you don’t “look gay” you aren’t. As a femme, I feel like I have to prove my gayness more than if I was super butch or androgynous.

Still, the gayer I get, the femmier I get as well. I used to be such an awkward little dyke as a kid. Yes, so much of that was because I was fat and my mom put me in boy clothes because that’s all that fit, but a lot of it stemmed from simply being different. 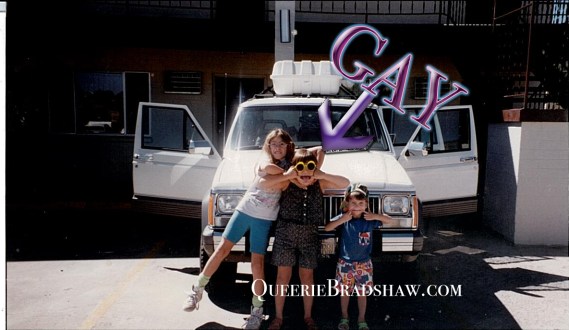 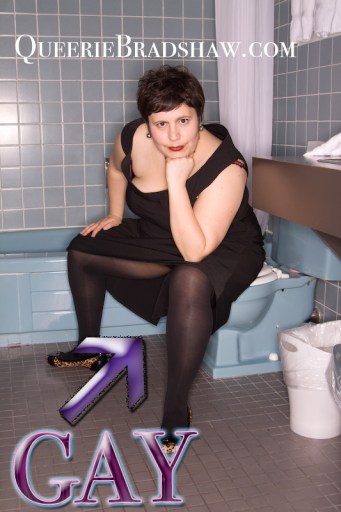 This is my trying to be butch.

Eventually, I found plus-size femme fashion and became comfortable with who I am and how I present my gender, but it took a long time to get there and not all of that was because of straight society. A large portion of my hesitation to dress femme and my desire to look more like a boy was the rejection I got early on from the lesbians I encountered.

It’s important to note the privilege that comes with passing for straight in the outside world before I go too far into my rant about how much it sucks looking straight in the queer world. I’m far more accepted and approachable by societal standards because I conform to gender stereotypes and people know where to place me in their safe little world of binary coding. I do not take the privilege I have for granted.

That said, it sucks being at gay events and having people question your gayness. It sucks being at a queer dance party and have no one hit on you because they don’t think they have a chance. I once was with a group of femme friends in SF and we were asked to leave a gay bar. They thought we were a bachelorette party. 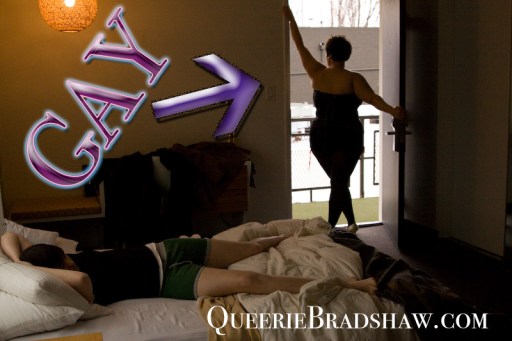 At least the lady at Motel 6 figured out I was gay.

It really sucks sitting writing your lesbian blog in a coffee shop full of dykes, all of which are hitting on each other, none of which are giving me a single glance.

My best friend once asked me (in not an all together kind way) why I feel the need to tell everyone I’m gay right off the bat. My response: “Because I’m sick of people assuming I’m straight.” 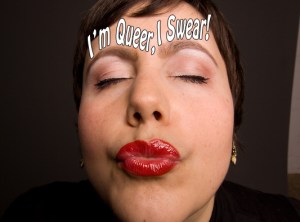 I'm still not sure about the font.

Ok, maybe not on my forehead. I’d settle for my cheek. Or my arm. 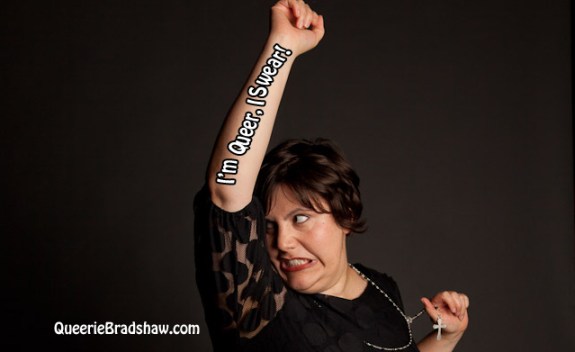 At the very least, I’d like one on my wrist.

Maybe I should make fake tattoos so I wouldn’t be so committed to a single part of my body but could instead put “I’m Queer, I Swear!” on any part – or every part – of my body that I desired.

I don’t really care where I put it or what it says, as long as I can find some kind of gay sign big enough for the hot dyke across from me in the coffee shop right now to come over and say hi.

What about other femmes out there? Or LHBs (long-haired butches)? Any of you have this problem? If so, I may have to start selling those temporary tattoos after all.

Lauren Marie Fleming is a writer, speaker and motivator known for her intimate, informative and often hilarious look at sex, relationships and body-image. Lauren runs the critically-acclaimed QueerieBradshaw.com blog, writes for major news sources including VICE, Nerve, Huffington Post and Curve, and is the author of her memoir Losing It: My Life as a Sex Blogger. In 2013, Lauren founded Frisky Feminist Press (FriskyFeminist.com) as a way to enhance conversations about sexuality through educational guides, online classes and entertaining publications. A law school graduate, Lauren has spoken all over the United States and is internationally recognized for her dynamic, engaging style. In everything she does, Lauren’s goal is to educate, remove stigmas and encourage people to achieve their desires.
View all posts by Queerie Bradshaw →
This entry was posted in Body Positivity, Fashion, Featured, Headline, LGBT/Queer Politics, Off Our Chests, Opinions, Rants and tagged femme, femmeproblems, femmesolutions, tattoo. Bookmark the permalink.

20 Responses to “I’m Queer, I Swear” Tattoo, a.k.a. Will Someone in this Damn Coffee Shop Just Hit on Me Already