In Honor of National Clitoris Day: How Cocks Helped Me Understand Clits

I have no idea why it’s today and not everyday. I also have no idea if this is a real thing or just something I celebrate, but somewhere along the line I was told that March 20 is National Clitoris Day and so I’ve celebrated it for about three years now.

I love the clit, but it’s a complicated bugger. I mastered the whole getting myself off thing when I was six, so when it came time to get another girl off I figured it would be easy peasy breezy.

Boy was I wrong. I whammed and I bammed but there was no thank you ma’am. The clitoris turned out to be as complicated as my guy friends had said it was. I soon realized that, while I can brush my own teeth, I need practice if I’m going to successfully brush other people’s teeth.

If lube were toothpaste, it would need to be Sensodyne.

“The clitoris is formed from the same tissues that would have become the glans and upper shaft of a penis … Because the clitoris is homologous to the penis, it is the equivalent in its capacity to receive sexual stimulation … Over a period of more than 2,500 years, some have considered the clitoris and the penis equivalent in all respects except their arrangement … In medical and sexological literature, the clitoris is sometimes referred to as ‘the female penis’ or pseudo-penis.”

Pictures confirmed what the article stated: the clitoris is just a small penis. 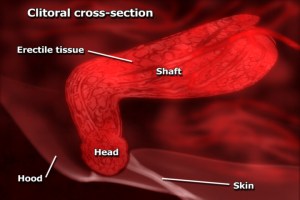 It’s like a little flaccid cock, all cozy up inside of me. (via Wikipedia)

This blew my mind. In all of my then twenty years of living, I never realized that I have a dick. And not only do I have a mini-weenie, but the girls I’m trying to get off have one too.

Eventually, my obsession got to the point where having a small dick wasn’t enough: I wanted – nay I needed – my own dong.

So I bought one. 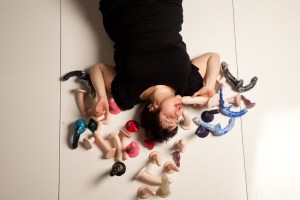 And oh my gawd, do I love it. While I fully support and love my trans* friends, I don’t pack because I want to be a man, I simply love the feeling of strapping on a cock. I love it dangling there between my thighs, I love the base pressing against my clit when I walk and I really love the look of excitement on someone’s face when they realize I’m wearing a dick under my dress.

Maybe it’s because we live in a patriarchal society or maybe it’s because I’m embracing my sexuality and that’s liberating, but I feel so powerful with a penis. As the leather straps tie me into my harness, I’m set free. My mind escapes into a fantastical world of power, a world where I’m free to fuck. Clits don’t have that freedom in our society. Cocks do. And with my cock, I do.

But not only did my cock bring me new pleasure and power, it also brought me knowledge. Strapping it on taught me the importance of having a rhythm to my humping, it freed my hands to explore before unknown erogenous zones and, most importantly, it taught me to appreciate and recognize the shape of my own phallus. 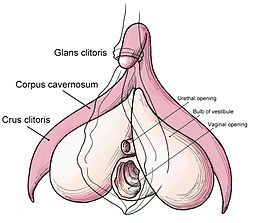 Like a penis, my clitoris has a base, a shaft and a head. Like a penis, my clitoris’s head is super sensitive, its shaft likes to be rubbed up and down and its base is often overlooked or even ignored. With this new information, I began playing with my clit in the way I played with a cock. I imagined myself jerking it off, going up and down the base instead of around and around the sides like before. I avoided overstimulating the head and started discovering the glorious pleasure found in its base.

I started getting myself and my partners off in new and wonderful ways. All of a sudden, there was a mountain of orgasmic information literally at my fingertips. Penises are visible and easy to understand, whereas the clitoris is hidden and mysterious. I know about penises because I’m literally surrounded by them all day, so picturing a simple small penis instead of a complicated clitoris took all the scary mystery away and left me able to visualize and organize my plan of attack.

Of course, I know it’s all more complicated than that. I know that penises and clitorises are far from the same, but simplification leads to demystification and picturing a penis made the clitoris seem simpler, easier, more manageable than it had been before. 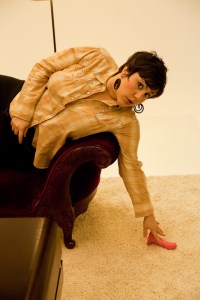 I also know that as a feminist and queer theorist, a lot could be said about living in a world where it’s easier for me to imagine something as its opposite than as what it really is, especially when that opposite is the object most often used to oppress in our society.  I recognize that as a woman who loves women, I theoretically should embrace the clitoris solely as a clitoris and not as a little sister to its bullying big brother the penis. I know that I should probably be spouting rhetoric about how my clit does just as much in a tenth of the space that a penis does and state statistics about its glory as the only organ built solely for pleasure.

Yet, while all of that is perfectly true and wonderfully important, the fact remains that imagining my clit as a cock sometimes helps to get me off. And if that’s not a good enough reason to do something, I don’t know what is.

No go off and celebrate National Clitoris Day! But before you do, leave us a comment below and let us know what gets your clit off.

Lauren Marie Fleming is a writer, speaker and motivator known for her intimate, informative and often hilarious look at sex, relationships and body-image. Lauren runs the critically-acclaimed QueerieBradshaw.com blog, writes for major news sources including VICE, Nerve, Huffington Post and Curve, and is the author of her memoir Losing It: My Life as a Sex Blogger. In 2013, Lauren founded Frisky Feminist Press (FriskyFeminist.com) as a way to enhance conversations about sexuality through educational guides, online classes and entertaining publications. A law school graduate, Lauren has spoken all over the United States and is internationally recognized for her dynamic, engaging style. In everything she does, Lauren’s goal is to educate, remove stigmas and encourage people to achieve their desires.
View all posts by Queerie Bradshaw →
This entry was posted in Feminism, LGBT/Queer Politics, Sex, Trans/Genderqueer/Gender Non-conformity and tagged advice, clitoris, gay, lesbian, National Clitoris Day, personal, Sex, sexed. Bookmark the permalink.

4 Responses to In Honor of National Clitoris Day: How Cocks Helped Me Understand Clits