Interview: Adrien & Slaven, Creators of “#1 must have” Queer Photo-Zine

Their partnership started with a Lick. 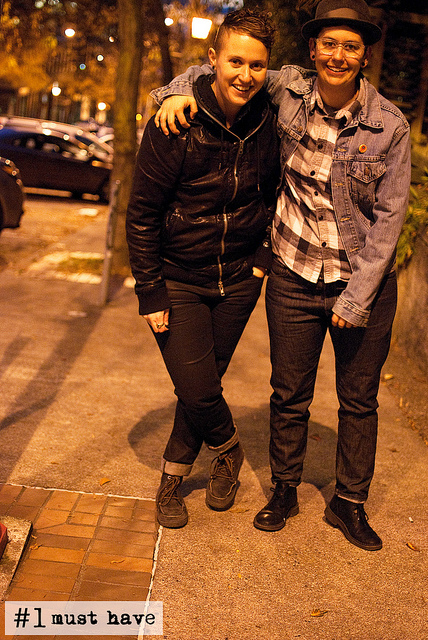 Adrien was DJing and Slaven dropped by. Soon Slaven was DJing as well and the two of them were running the popular queer club night in Seattle together. 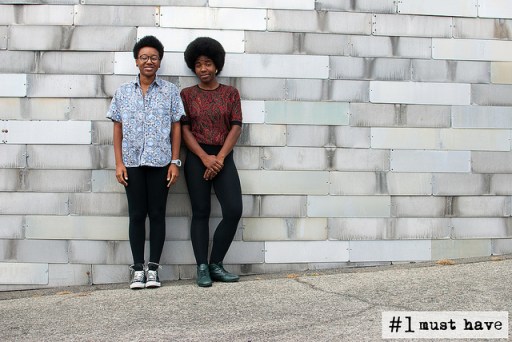 Through Lick, a community was built, a community in need of exposure. So Adrien, a recent law school graduate, started shooting and with the production expertise of Slaven, a public librarian, the two of them produced their first #1 must have photo zine in December 2011. 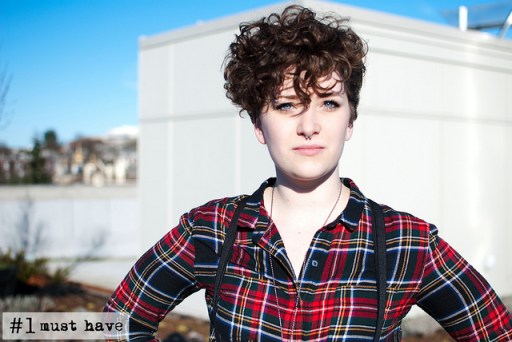 “It started with a mission statement,” Slaven said, explaining that their goal was to represent the diversity within their community, especially ethnically and in regards to gender. “We purposely don’t shoot our close friend and try to break out of the people we’re used to seeing all the time.” 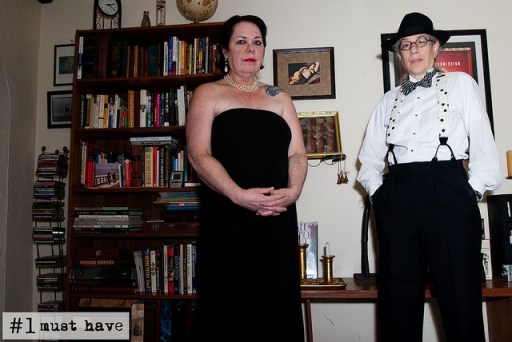 By doing this, the two not only challenge themselves but allow for a full representation of their community. They also let their subjects (with some artistic guidance) pick the location of their shoots, giving each one an intimate, personal feel. 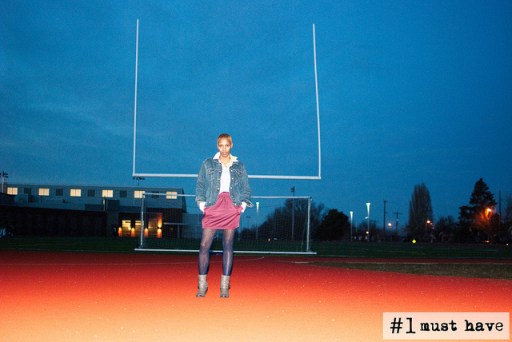 This high school was chosen because the model went there.

The name of the zine, “#1 must have,” is an homage to the Sleater Kinney song of the same name that talks about the commodification of the Riot Grrrl movement. Slaven and Adrien chose the name because they wanted a link to their shared music connection and appreciated the song’s message. 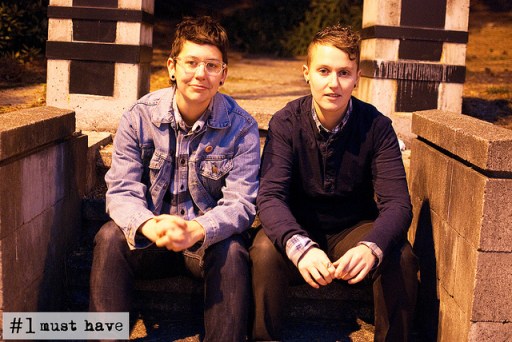 I know what you’re probably thinking right about now, these two are fucking sexy. You would not be wrong. In fact, they’re even more attractive in person, or technically speaking over Skype, since that’s the only way I’ve met them so far. 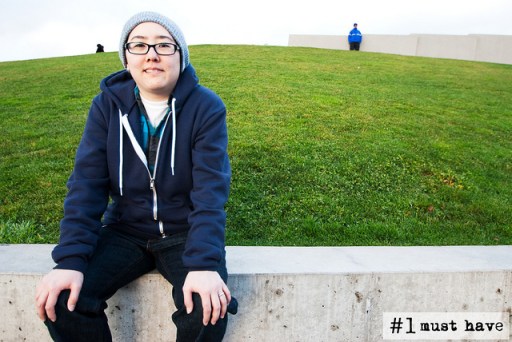 Adrien was standoffish at first, allowing Slaven to answer most of the questions, but by the time they were halfway through their bottles of Pilsner Urquells, they were both opening up and adorably giggling together as they spoke. They’re the kind of queers I’d want to grab a beer with. In bed. 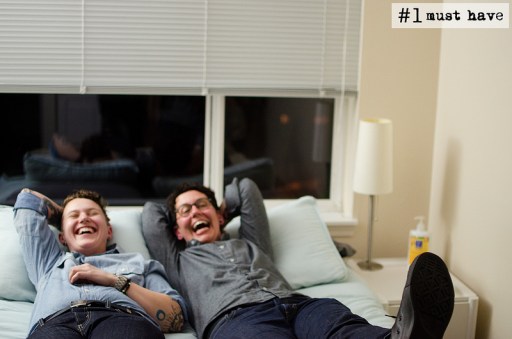 Giggling in bed after our interview. I knew I should have driven up there.

Maybe it’s just because I’m attracted to talent. And boy are these two talented. 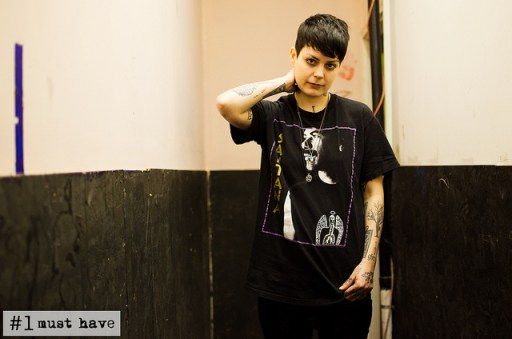 I first came across their photos via Tumblr and was entranced. The saturated colors are what really attract me to them. The colors and the subject matter of course. I love a good photo of a queer and #1 must have is full of great photos of queers. 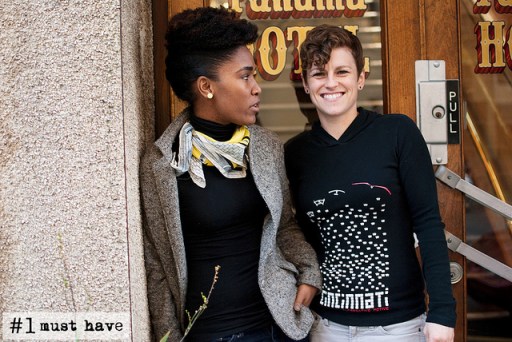 They make amazing art, they DJ, they’re hilarious, they’re adorable and they’re fucking sexy, so it shouldn’t be a surprise that they’re both partnered up. In fact, Adrien’s partner gave him the confidence to take portraits of strangers. “My girlfriend used to hate having photos taken of her,” Adrien said, “so did Slaven. After taking photos of them that they liked, I had confidence that I would portray other people in a way they also liked.” 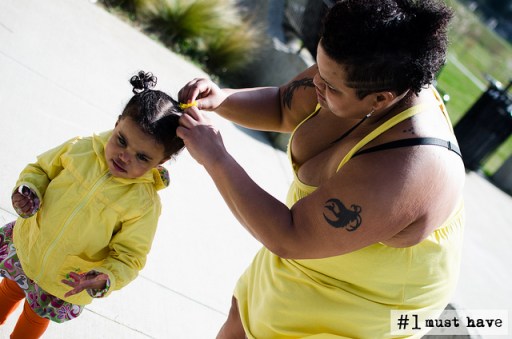 Adrien is definitely portraying his subjects in a way I like and he and Slaven have developed a great looking zine, website and tumblr that showcases a colorful community rich in diversity. 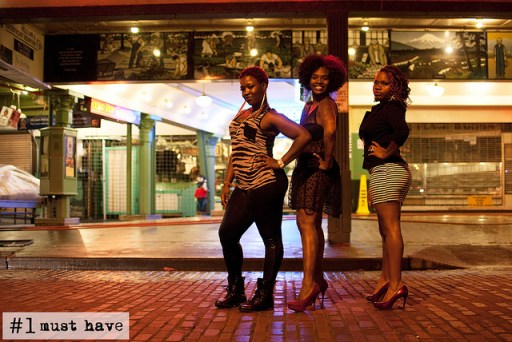 Check out #1 must have online and buy the physical zine or one of their great black on black triangle shirts, both delivered directly to your door (unfortunately not by Adrien or Slaven, but a girl can dream).

If you want to see their work in person, the photos from #1 must have are a part of a two gallery show held in conjunction with the Tacoma Art Museum. They can be viewed at “Queering the Museum” at The Space in Tacoma, WA (opening reception 5/12/2012) and “Author & Subject: Contemporary Queer Photography” at The Photo Center NW in Seattle, WA.

If you want to see more of Slaven and Adrien (and who wouldn’t), the next Lick is on June 2 in Seattle, WA. They’re bringing up DJs Mister Charming and Roy G Biv from Portland for it and I might just have to mosey my way up Interstate 5 to make it as well. 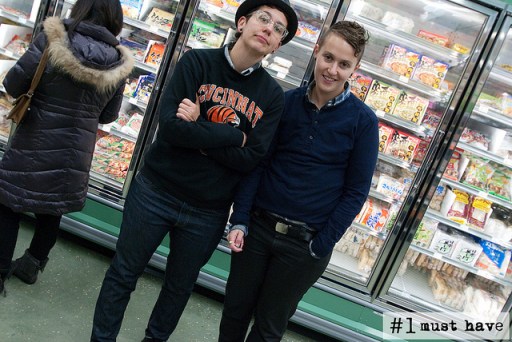 Slaven and Adrien at Uwajimaya, my fave grocery store.

Lauren Marie Fleming is a writer, speaker and motivator known for her intimate, informative and often hilarious look at sex, relationships and body-image. Lauren runs the critically-acclaimed QueerieBradshaw.com blog, writes for major news sources including VICE, Nerve, Huffington Post and Curve, and is the author of her memoir Losing It: My Life as a Sex Blogger. In 2013, Lauren founded Frisky Feminist Press (FriskyFeminist.com) as a way to enhance conversations about sexuality through educational guides, online classes and entertaining publications. A law school graduate, Lauren has spoken all over the United States and is internationally recognized for her dynamic, engaging style. In everything she does, Lauren’s goal is to educate, remove stigmas and encourage people to achieve their desires.
View all posts by Queerie Bradshaw →
This entry was posted in Art, Featured, Headline, Interview, LGBT/Queer Politics, People, Photography, Stuff We Love, Trans/Genderqueer/Gender Non-conformity and tagged #1 must have, photography, queer, queer zine, zine. Bookmark the permalink.