Before meeting her in the speakers’ room at the IvyQ conference in February, I couldn’t have told you who Kate Bornstein was. She was wearing this exact hat too.

I could, however, tell you a bit about her book, Gender Outlaw: On Men, Women and the Rest of Us

But I couldn’t really tell you anything about Kate herself until that afternoon in Providence, Rhode Island when she brought a room full of activists, scholars and students to laughter and tears and laughter again all just by being herself.

And there to record every moment was filmmaker Sam Feder. 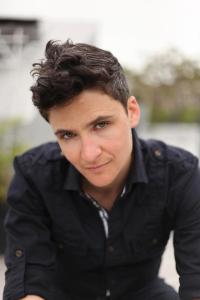 Standing in all black on the sidelines of Kate’s conversations, Sam (whose preferred gender pronouns are they/their) stood silently discerning, taking in the scene with a keen eye, documenting their surroundings. A sharp contrast to Kate’s flamboyance, Sam was pensive and quiet, almost shy, and took awhile to open up.

But open up Sam enthusiastically did when I asked them about the documentary film in progress Kate Bornstein is a Queer and Pleasant Danger. “It’s a really important film,” they said. “It’s part of our queer history. It needs to be out there.”

Kate and Sam met in 2006 when Kate was a guest on the show “Gay USA” where Sam was the technical director. In 2007, Sam interviewed Kate for their film When the Dust Settles, a documentary series on transfeminism. Kate didn’t make it into the final film but a mutual respect grew between the two – Kate had watched and liked Sam’s critically acclaimed documentary Boy I Am and Sam had found the ability to understand their own gender identity through Kate’s work. 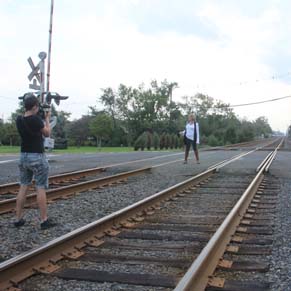 “Gender Outlaw made me realize how I could grow up as a queer person,” Sam said. “It’s rare to find this kind of mentor. When I finished the book, I immediately gave it to my mom to read.” Sam’s mom, a grammar teacher, is currently working on a book that includes “they” and “their” as optional singular, gender-neutral pronouns – a grammatical style that used to be common. 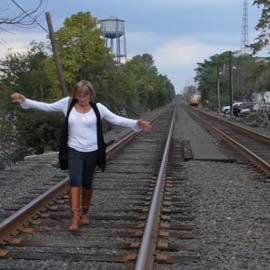 As Sam and their mom shows, Gender Outlaw’s

reach spans across generations and out past the queer community. “I feel like I’ve developed a familial relationship with Kate,” Sam said, “Just like a lot of people do.” 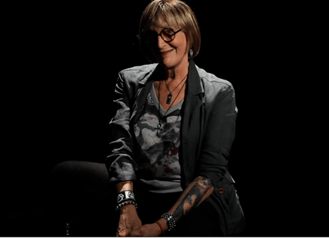 “I want the aesthetic of the film to match Kate’s,” Sam said, “Pretty, erratic, queer and inspirational.”

It’s hard to explain Kate Bornstein to those who haven’t met her, but “pretty, erratic, queer and inspirational” sums her up rather well. There’s a beauty about Kate that radiates outward, basking everyone around her in the warm glow of acceptance. Kate’s policy is do whatever makes you happy as long as it doesn’t hurt someone else. She’s an advocate for teens, freaks and outlaws and is known as “Auntie Kate” to her over 13,000 Twitter followers and millions of admirers.

To filmmaker Sam Feder, Kate Bornstein is an inspiration, both as an activist and as a human being. “Kate and her partner [sex educator and artist Barbara Carrellas] have been together for fifteen years. In addition to [inspiring me through] her work on gender theory, her relationships are role models for me as well,” Sam said. Kate and her partner Barbara, photo by Sam Feder

“Spend that much time with someone asking them personal questions,” Sam says of their relationship with Kate, “And you get to know them. Our relationship has transcended the film and I feel lucky for that.” 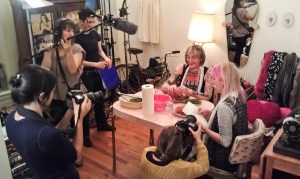 Sam even occasionally babysits Kate’s dogs and is in particular love with Calla Lilly, a pug that plays a significant part in the film. “We should subtitle the movie ‘A Film About Calla Lilly,” Sam jokes of the dog’s starring role. 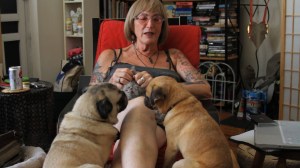 Sam’s closeness with their subject and Kate’s willingness to honestly and candidly open up makes for an amazing combination and an intensely personal film, or at least the small bit I’ve seen so far in the Kickstarter video.

I want to see the whole thing finished, up on the big screen, in a theater near me and you. Which is why I’m asking every one of you to go to Sam and Kate’s Kickstarter page and give a little – or a lot – to help keep this project going. As of now, the project is fully self-funded, but significant help is needed to make it the high-quality, full-length feature that a force of good like Kate Bornstein deserves.

If you can’t help financially, spread the word online about the project and help bring awareness to Kate and the wonderful work she does. Join the film’s Facebook page and most importantly, go see the film when it comes out!

If you can’t wait until then to get your fix of Kate’s inspirational words or Sam’s beautiful images, go out and grab a copy of Kate’s new memoir

Queer and Pleasant Danger and get Sam’s award winning film Boy I Am from Women Make Movies. 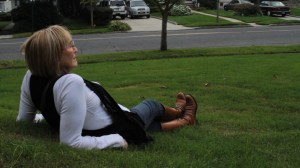 Editor’s note: On June 4, 2012, Sam and Kate reached their $20,000 minimum to get this project funded! However, $20k is the absolute bare minimum they need, so you should still donate and help make this film as spectacular as possible. Here’s a run-down from Sam of where additional money over the $20k minimum will go:

There’s also a shirt design competition for backers, so ya’ll should get in on that as well.

Lauren Marie Fleming is a writer, speaker and motivator known for her intimate, informative and often hilarious look at sex, relationships and body-image. Lauren runs the critically-acclaimed QueerieBradshaw.com blog, writes for major news sources including VICE, Nerve, Huffington Post and Curve, and is the author of her memoir Losing It: My Life as a Sex Blogger. In 2013, Lauren founded Frisky Feminist Press (FriskyFeminist.com) as a way to enhance conversations about sexuality through educational guides, online classes and entertaining publications. A law school graduate, Lauren has spoken all over the United States and is internationally recognized for her dynamic, engaging style. In everything she does, Lauren’s goal is to educate, remove stigmas and encourage people to achieve their desires.
View all posts by Queerie Bradshaw →
This entry was posted in Art, Featured, Headline, Interview, People, Stuff We Love and tagged documentary film, filmmakers, gender identity, Kate Bornstein, outlaws, queer, queer theory, Sam Feder. Bookmark the permalink.