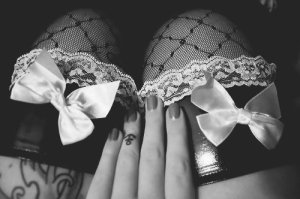 Of course I always dress like this. (via Weheartit)

If this website was a cocktail party, and I was introducing myself, I might just stop at that; let the conversation flow. You know, a little playful banter, exchange of names, and so on. But given that this isn’t a cocktail party (and you don’t get the chance to see me rock a little black dress), I suppose an introduction by way of words will do.

As much as I certainly subscribe to the sentiment of “Label jars, not people!”, I’ve reconciled myself to them; to the idea that labels aren’t all bad. Some of them are self-clarifying, and some of them help me communicate more complicated parts of myself to others (without blabbering on for two hours just to end with the stammered phrase, “well, you know, I’m just attracted to…people”). So without further ado, here are a couple labels we can toss around when speaking of Alanna LaFemme:

College student. That’s an easy, uncomplicated one. I’ve got two decades under my belt, and I’m studying happily at a reasonably-sized liberal arts university. True to radical queer intellectual form, I’m studying gender and sexuality and spending my free time working on all manner of queer activist projects. Let me know if I get too excited and dip into feminist/queer theory too much… it’s a hard habit to break.

Feminist. I’ve been a self-described feminist since before I left preschool (thanks Mom!). For me, feminism means fighting the patriarchy not just for “women’s rights” but for the elimination of discrimination, hatred, prejudice, and judgment of all kinds on the basis of gender. I see my feminism related to hundreds (thousands) of other movements—anti-racism, anti-ableism, anti-heterosexism, and so on.

Sex-positive. Sure, I have very positive personal feelings about sex, but that’s less important than my belief that sexual freedom is an integral part of eliminating hierarchy, repression, and hatred, and that each individual has a right to make their own decisions about sex and sexuality. I believe in bodily autonomy and the fundamental beauty of all bodies (so add on body-positive to this one).

Unmarked. I embody a variety of what might be called “unmarked identities”: ones that are assumed unless proven otherwise. Examples: I’m cisgender, white, usually gender-conforming, middle income, and able-bodied. I’ve learned the need to challenge and check my own privilege.

Queer. That might have seemed obvious. I am, as they say, queer as folk. I’ve known I wasn’t solely a man-loving, hetero-living lady since the tender age of ten, but I’ve only been public about my same-sexy attractions for the past three years.

Femme. Femme, not feminine. Femme is a conscious choice; a way of life; a combination of pride in the number of sequins I can fit into one outfit and overcoming shame for not feeling “queer enough.” Femme is, to quote Leah Lakshmi Piepzna-Samarasinha, “about finding a way to be a girl that doesn’t hurt.” Deep down, I’ve always been a womyn who wants to fuck the patriarchy with eyeliner and glitter. 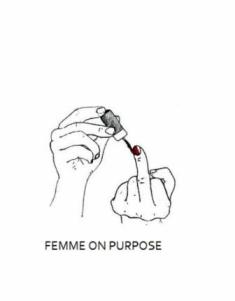 Hell to the yes. (via Umsuqueer)

Pansexual/Bisexual. Pansexual, because it’s accurate—I’m attracted to people regardless of gender, with a tendency towards people of all genders who present “boyishly” (boi-ishly?). Bisexual because it’s what I said when I came out—I’m emotionally attached to the word because of the freedom it gave me.

Activist. As Alice Walker famously said, “Activism is my rent for living on this planet.”

Like any other reasonably complicated human being, I could continue that list of labels for hours—it’s the nature of labels that they’re always incomplete. But here’s hoping that this provides a tiny glimpse into my lived experience.

Looking forward to seeing you around the site! *Wink*

To learn all about me, see this post I wrote as an introduction to being a new contributor for QueerieBradshaw.com: http://www.queeriebradshaw.com/introducing-alanna-lafemme-our-latest-contributor-addition/
View all posts by AlannaLaFemme →
This entry was posted in Announcements, Featured, People and tagged activist, Alanna LaFemme, bisexual, feminist, femme, introduction, labels, pansexual, queer. Bookmark the permalink.