Mixed Tape Mondays: 90’s Rap Songs That Make You Want to Get Laid!

The other night I was having a text conversation with Queerie Bradshaw and as the weird and quirky person I think I am, I decided to text her a few sentences I put together using Blackstreet’s No Diggity lyrics. The text was: “Lauren, shorty get down good lord. You know baby got’em open all over town. Also strickly biz she don’t play around. Cause she cover much grounds and got hell of a game by the pound. Know what I’m sayin?!” Her response: “WTF? Are you drunk?” Followed by: “MTM! 90’s rap songs that make you want to get laid!”

So I present to you 90’s rap songs that make you want to get laid! 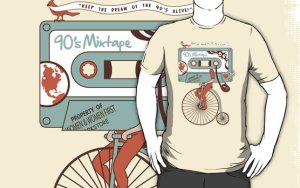 Tony Toni Tone – Lay Your Head on My Pillow

Ev Vogue – Giving Him Something He Can Feel

One Response to Mixed Tape Mondays: 90’s Rap Songs That Make You Want to Get Laid!