Mixed Tape Mondays: Oldy but Sexy, aka Our Grandparents Listened to Sexy Songs Too

We often think that the sexual revolution began in the 1960’s and that gay rights started with Stonewall, but the reality is sex, even queer sex, has been around forever and the 1920’s provided a particularly rampant sexual era.

This got me thinking about all the sexualized songs that existed in my grandparents generation, way before Elvis’s thrusting pelvis made the scene. My grandfather and I paint in his studio together and he loves to point out how scandalous the Andrew Sisters – a favorite of ours to play while painting – were with their songs of “sea food” and discussion of prostitution.

I love these old songs because of their subtlety. I want to eat that barbeque, I want to shave ’em dry and I want to be a honeydripper so much more than I want to drink the “cocktales” of today’s music (although I must admit I love dirty songs of today as well). Some of them, however, aren’t quite so subtle and are outright offensive, especially for their time. And that makes me love them even more. 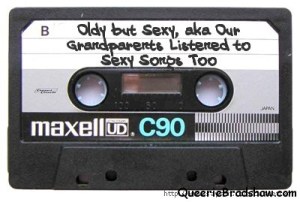 (This list made with help from the album Vintage Sex Songs

, a movie I once saw about queer women in the 20s, my grandfather – who introduced me to a lot of this music and pointed out to me that they’re about sex – and our Facebook and Twitter followers. Follow us on Twitter and Facebook to help us make future Mixed Tapes.)

I Need A Little Sugar In My Bowl – Bessie Smith

I Found Your KeyHole – Al Miller

Know any that we missed?

Lauren Marie Fleming is a writer, speaker and motivator known for her intimate, informative and often hilarious look at sex, relationships and body-image. Lauren runs the critically-acclaimed QueerieBradshaw.com blog, writes for major news sources including VICE, Nerve, Huffington Post and Curve, and is the author of her memoir Losing It: My Life as a Sex Blogger. In 2013, Lauren founded Frisky Feminist Press (FriskyFeminist.com) as a way to enhance conversations about sexuality through educational guides, online classes and entertaining publications. A law school graduate, Lauren has spoken all over the United States and is internationally recognized for her dynamic, engaging style. In everything she does, Lauren’s goal is to educate, remove stigmas and encourage people to achieve their desires.
View all posts by Queerie Bradshaw →
This entry was posted in Featured, Music, Playlists, Stuff We Love and tagged 1920s, 1930s, Lucille Bogan, music, Sex. Bookmark the permalink.

One Response to Mixed Tape Mondays: Oldy but Sexy, aka Our Grandparents Listened to Sexy Songs Too