My Dad and Guy Kawasaki, a.k.a. The Importance of Talking About Feminism and Stereotyping

Right after the whole titcircle debacle, I was sent a link to an article on the Huffington Post written by Peg Fitzpatrick called “Words Have Power, Use Them Wisely.”

Peg Fitzpatrick is the assistant to Guy Kawasaki, one of the keynote speakers at BlogHer ’13. In this article, she calls a blogger out for calling her boss out on Twitter for sexist comments he made during a speech at BlogHer13.

What? How do you not know me? I’m like totally famous and stuff. (Peg Fitzpatrick’s comment to someone else who mentioned me by name.)

Still, I wanted to write about the whole thing, about the hypocrisy of Peg Fitzpatrick telling someone to choose their words wisely when they were upset with her boss for his badly phrased remarks, about how the blogger she called out, whoever she was, was far from the only one upset with Guy for his remarks despite Peg making her out to be a lone man-hater, about how women have the right to call out misogyny especially at a conference meant to empower women, about how Peg Fitzapatrick has the right to call them out for calling her boss out if she thinks their remarks are wrong, how everyone has a right to exist and voice themselves online, etc. 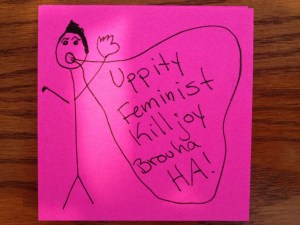 But when I sat down to write, Guy Kawasaki wasn’t the man I wanted to write about; my dad was.

I’m a memoirist, I write about my life and the things I know, and frankly, I don’t know shit about Guy Kawasaki. Before BlogHer, I didn’t even know his name, more or less his assistant Peg Fitzpatrick.

But I know a lot about my dad.

The day after I posted my titcircle article, my dad called to tell me he read it.

My dad read a whole post about my cleavage.

More than that, my dad read about the concept of taking up space, something that was extremely exciting for me considering he was one of the people in my childhood who encouraged me to lose weight, behave and take up less space.

He called to compliment me on it. He told me he was very proud of me. He said he loved me for what I was doing. He said he loves me for creating my own space, standing up for myself and not letting others get me down.

My heart melted with the happiness that comes from a parent’s acceptance, love and support. 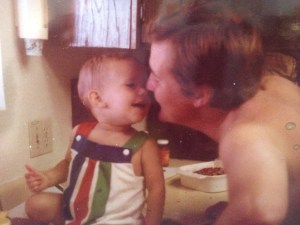 My dad is a feminist in his own way. He believes in a woman’s right to choose, he believes in equal pay, he believes in the concepts of feminism as much as any straight, white, male can. Yet, he is still sexist in the same way I’m occasionally racist, accidentally, without even knowing what we’re doing, because we’re brought up in a society steeped in the tradition of othering, of pointing out the dangers in other’s flaws. 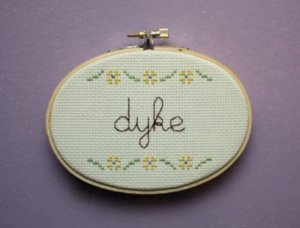 My whole family is steeped in that Othering, often making jokes or comments they think are funny but really are hurtful to someone, somewhere.

I am the family feminist killjoy.

I used to join in on the joke, laugh at that racist stereotype right along with them, but now I’m the one who points out any sexist, racist, homophobic, ableist, trans*phobic, classist, stereotyping comments said around me because I see the damage that laughing at others can do.

When I first started protesting, I did it in a loud, aggressive, confrontational way, but then I realized that’s just divisive and never helps persuade anyone to think anything but the opposite of what I was saying.

Now I make an effort to meet people where they are, I try to speak to them in terms they understand and make an attempt to accept that everyone’s points of view come from what is in front of them.

It’s harder with my family. It’s harder because so much more of my self-esteem and self-worth is wrapped up into what they think and who they are. You associate yourself with your family, connected on a level beyond biology and blood, culturally clumped together, sociologically similar. 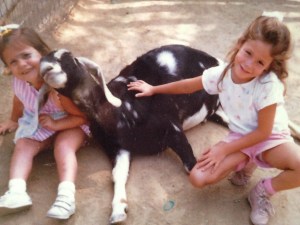 I need a goat already.

But I can’t change them, just like they can’t change me. We are who we are, and while my brother’s death was horrific in so many ways, it wiped away our differences, highlighted our similarities and brought us all so very close to acceptance. 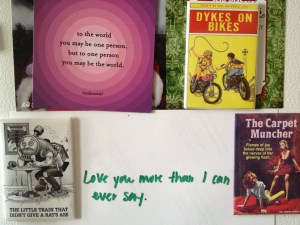 A note and magnets, all from my sister, all hanging together on my fridge.

I am a queer, feminist, fat, activist, sexpert, writer and my small town farming family loves me. And I love them.

Well, it would be easy to simply say “because we are blood” but it goes beyond that. We are bonded together because we talk. We sit and share our lives with each other. We always have been a family of talkers, but it wasn’t until after my brother died that we really started listening. A wall came down and we’re able to communicate in a much more real and authentic way.

My brother’s death was horrific beyond belief, but there’s something wonderful in the bond it created between my family. 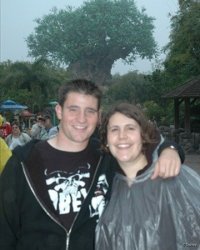 I miss him every day.

The words I use around my father have helped shape him into a more understanding man, one that checks his privilege in ways I’m so very proud of, one that recognizes that he will never understand the world his queer, writer daughter lives in but tries anyways.

My Republican, farmer, small town father makes a very large, very substantial, very conscious effort to understand me and my world, and I am am so lucky, honored and privileged to have a father who makes any kind of effort, more or less such a grand one. 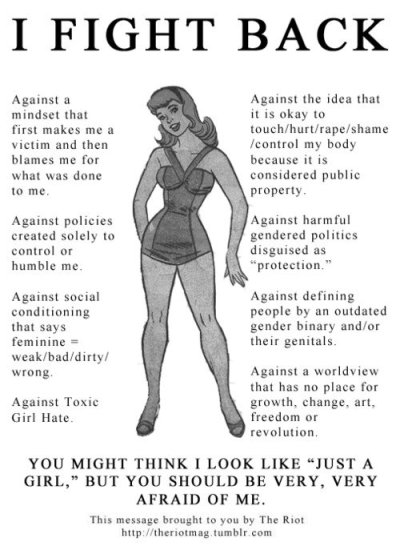 I wish Guy Kawasaki and Peg Fitzpatrick had reached out to the women who called him sexist to have a conversation about it, instead of attacking them for being offended. I wish every person who gets angry when they’re called out for hurting someone could talk to that person about why they’re hurt instead of assuming the person was overreacting.

Critical conversations are key and an opportunity was missed by Guy Kawasaki and Peg Fitzpatrick to have one. But just because they weren’t having them, doesn’t mean we all don’t have a chance to talk.

Good can come out of these highly emotional, provocative situations if we just take a step back and talk to each other.

If you’d like to read more in-depth analysis of Guy Kawasaki’s remarks by people who are having critical conversations about this issue, check out these blog posts:

Keep talking. Keep putting yourself out there. Keep having critical conversations.

P.S. My dad wasn’t the only support in my family after the titcircles incident. My sister and mom also were great. 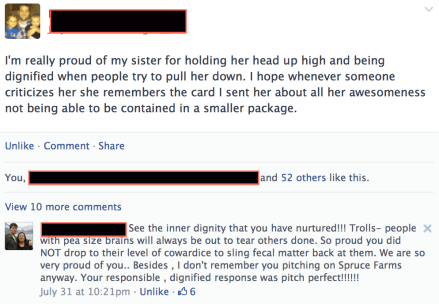 Lauren Marie Fleming is a writer, speaker and motivator known for her intimate, informative and often hilarious look at sex, relationships and body-image. Lauren runs the critically-acclaimed QueerieBradshaw.com blog, writes for major news sources including VICE, Nerve, Huffington Post and Curve, and is the author of her memoir Losing It: My Life as a Sex Blogger. In 2013, Lauren founded Frisky Feminist Press (FriskyFeminist.com) as a way to enhance conversations about sexuality through educational guides, online classes and entertaining publications. A law school graduate, Lauren has spoken all over the United States and is internationally recognized for her dynamic, engaging style. In everything she does, Lauren’s goal is to educate, remove stigmas and encourage people to achieve their desires.
View all posts by Queerie Bradshaw →
This entry was posted in Alternative Families, Essays, Events, Featured, Feminism, Headline, LGBT/Queer Politics, Off Our Chests, Opinions, Personal, Politics and tagged Andrew, BlogHer, BlogHer13, cancer, Family, fat, fear, feature, featured, feminism, feminist, gay, grief, personal, personal story, relationships, sexism, shame. Bookmark the permalink.

One Response to My Dad and Guy Kawasaki, a.k.a. The Importance of Talking About Feminism and Stereotyping