My Sexy Encounter With The Cable Guy

As you may have read in a previous post about nothing but dry vaginas up in here, it’s been a long while since the last time I had sex. Life has kept me pretty busy from finding my next potential partner. From school, to work, to writing, to moving, to pretty much not having any time whatsoever for myself. The thing that has kept me the busiest was moving. I signed a lease for an apartment that wouldn’t be ready for a week after the lease was up on the current apartment I was in. I had to move all of my crap into storage, stay with a friend and move all my crap out of storage a week later into my new apartment. A long and tedious process I hate going through.

It was the first Saturday morning in my new place and the worst was over. My sister and I were completely moved in, she was at work and I was waiting for the cable guy to arrive to install our new service. I was expecting him to arrive around 10am, but was not expecting him to be a young and sexy Latin man. He was my height, dark skinned with dark hair and a physically fit body to match that of a surfer. When he started to ask me questions in English about the service I wanted installed, I could tell by his thick accent he spoke better in Spanish. So I started speaking to him in Spanish to make him feel just a little more comfortable. 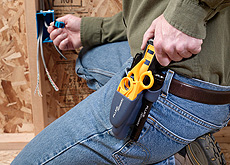 While he was busy measuring, moving our television sets, cutting and placing cable wire, I made small talk with him while I unpacked the kitchen boxes. I learned that he was from Peru, had been in the U.S. for 10 years, single and living in La Jolla with a roommate. He asked what I did for a living and I explained to him how during the day I work in an office, but during my free time I like to write about sex. He was very intrigued and started asking questions about my writing. I saw this as an opportunity to do a little flirting and keep him interested. The more I answered his questions in detail, the more he asked; and the more he asked, the more I answered. I was not holding back whatsoever.

When he lifted the living room television to place on the table, he set it down quickly and reached towards his lower back to put pressure on it with one of his hands. I asked if he was ok and he answered he was just a little hurt from his kickboxing class. I knew exactly what to say next. “I’ve been told I give really good back rubs. If you’d like I can give you one?” I asked. He looked up at me and said, “Can the writer in you give me the back rub?” “Of course.” I answered.

I asked him to sit on one of the dining room chairs and gave him a bowl of cherries, banana pieces and strawberries to eat while I gave him the back rub. I thought the bowl of fruit was a sexy touch. I started putting my hands on hi shoulders, gently rubbing out his hard muscles. He sighs in satisfaction and I lower my hands to work on his lower back. A million things were going through my mind. I wanted to take off his shirt, splash oil all over his back and lower my hands on his body massaging as low as he would let me. But I was too chicken to do it. So I continued slowly to massage him, touching every part of his back. He continued to sigh in satisfaction and I kept plotting my next move. I wanted to do so much more but I was wondering if he would even let me.

I lowered my hands on his lower back, tucking my fingertips under his belt. He hadn’t stopped me at that point, so I decided to continue. I was getting ready to put my hands under his shirt when I hear someone coming up the stairs to my apartment. I see my sister through the living room window coming home for lunch and all I could think was “Nooooooooo!!!!!” I quickly tell him I was finished and that he should probably leave if he was finished also. He collects his tools and leaves with a smile on his face. I say goodbye with an even bigger smile on my face.

I don’t know what would have happened if my sister didn’t come home. Wait, that’s a lie. I know exactly what would’ve happened. Maybe I’ll plan a service call someday for a fake problem with my cable. But first, I’d be completely sure no one would come home. What would you have done?

This entry was posted in Confessions, Crushes, Dating, Ethics of Lust, Off Our Chests, Relationships, Sex and tagged crush, flirt, Lima, Peru. Bookmark the permalink.

2 Responses to My Sexy Encounter With The Cable Guy