I’m not gonna lie. I had Frank Sinatra’s song “New York” on repeat on my way to the airport. I kept telling myself, “It’s here. It’s happening. It’s today. It’s right now.” I couldn’t shake the nervous feeling of not knowing what I was about to get in to. I had been dreaming about going to New York ever since I was a young Mexican kid flipping through the channels on basic cable. As I grew older and fell in love with singing, I’d imagine moving to New York to become a Broadway star. Or as my back up plan, a hard-core journalist showcasing stories that matter and bringing the news people wanted to hear. It was one giant dream I would often talk to my best friend about in high school and always said to myself, “One day.” 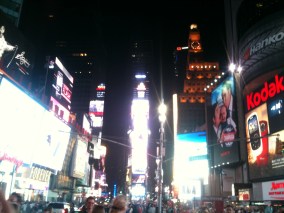 That day came and went. And I couldn’t have expected a better experience. Working with Queerie and learning so much about blogging lead me to the opportunity to attend the BlogHer conference in New York this year. I come from a very small town in Southern California and wherever I have traveled has always been by car for road trips or by ship on a Mexican cruise. I’ve never flown in a plane before and the biggest city I’ve probably ever been in is Los Angeles. Being from Southern California, Los Angeles has always been easily accessible to me and often went there. But I have always dreamed of New York. The opportunity to go has never crossed my path until now and I think it was perfect timing. I don’t fully believe in destinies because I think we set our own, but I feel as if this trip was destined to have happened at this specific time in my life. 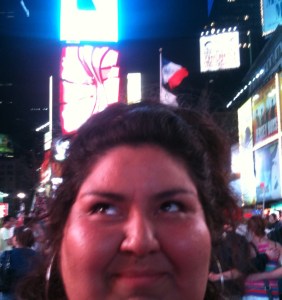 I suck at taking pictures of myself. Time Square.

My brother and I were on our way to the airport, about to drop me off for my red-eye flight when I started feeling a little anxious. Since I had never flown before, I didn’t know what to expect. I started to lightly hyperventilate; and while he was trying to calm me down, I couldn’t stop thinking about how I’m going to get to New York in this tiny plane, if it’s going to make it there, if it’s going to be a bumpy ride, and if I’ll even fit in the seats. I’ve spoken to Queerie about my fears of being kicked off a plane for not fitting in the seats. I’m a size 28 in woman’s jeans and people smaller than me have been kicked off because of their size. I was afraid of being told “You’re too fat to fly. Please exit the plane.” Or, that I would have to purchase another ticket for an extra seat, which I could not afford. I imagined myself stuck at the airport calling my brother to come back and get me because I couldn’t get on the plane.

As I waited to board, I grew calmer. I thought maybe I was making a big deal out of nothing. But as the announcer called for boarding, my rapid heart beat jumped to my throat and I began feeling light-headed as I entered the plane. I stepped into a Virgin America plane and I was afraid I was going to faint. I kept looking at all the seats and thinking to myself, “Am I going to fit in it?! Am I going to fit in it?!” I swear I heard the holy lyrics of “Hallelujah” in my head when I sat down and tightly squeezed into my seat and fit. No seat-belt extender needed. It was a tight plane ride, but at least no one could tell me I didn’t fit. 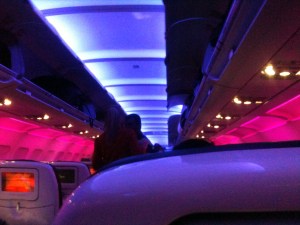 When I arrived at JFK, I couldn’t wait to get to the city. The humidity had already hit my frizzy wavy hair and I was running all over the airport in flip flops looking for baggage claim. I arrived close to 11am at the hotel I was staying and saw Queerie for the first time in 10 years; a very heart-felt-hug welcome to New York followed by my squeals of excitement. I was captivated by the buildings. Instead of looking forward when walking, I kept looking upwards completely fascinated by these enormous sky scrapers. I couldn’t believe I was finally there. This may be strange to say, but when I got to the city, I could literally feel New York. I could feel its energy, its presence, its culture and there was nothing more I wanted to do but discover it.

The five days I was there went by too quickly. It is impossible to pick one favorite thing. But here are the things I’ll never forget:

The Metropolitan Museum of Art – Thanks to a friend of Queerie’s, we got free admission. I was jaw-dropped almost the entire tour; although it’s impossible to see the whole museum in one short visit. I would love to devote one trip to New York just to see every single display. 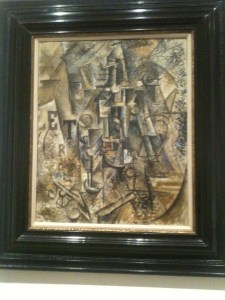 I totally geeked out when I realized I’m standing next to an original Picaso!

Central Park – Every time I hear the words “Central Park” I think to myself “Central Park? The Central Park?!!!” I once read that it was built to improve the housing economy in New York. Having seen it for the first time in person, I can see it worked. It’s probably the most beautiful man-made piece of land I’ve ever seen. 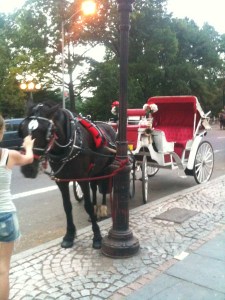 I thought the horses looked so beautiful.

Chinatown/Soho/Little Italy – I always hear so much about these little neighboring areas of the city. Whether it’s in a book or on a show, I’ve always wondered what each neighborhood looks like. It’s much more different than midtown center. There are lower buildings, less taxis, and less people walking the streets. It was quite the adventure trying to get from Soho to our hotel by myself. But I survived. Thanks to Queerie showing me around and eating delicious Chinese food for a really cheap price, I no longer need to wonder.  Although the next time I go, I would really like to spend more time there. 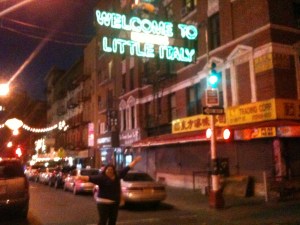 Queerie: Jessenia, I know you want to take a picture under that sign. I saw you looking at it earlier. Want me to take your picture?
Me: Yea!!!!

Time Square – The most famous part of the city that’s in media entertainment; Time Square delivered its awesomeness with beautiful bright shining lights. Crowded to the max, bumping into people everywhere I walked, I took in the glory of the energy and culture completely surrounding me. I can’t find a better word for amazing. It truly was. 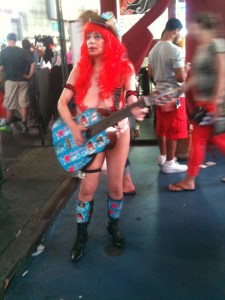 I was looking for Naked Cowboy but got Naked Cowgirl instead. 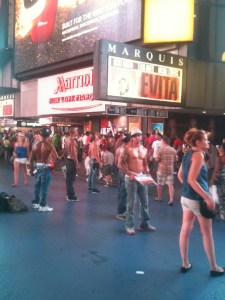 “No, young man, I was NOT taking pictures of you guys from behind.” (snap! snap! snap! walk away. snap!)

Subways – Each trip on a subway was an adventure for me. If I can get lost using a bus to get me somewhere, then I can definitely get lost using an underground train. I’d be sure to memorize which subway I’d have to take and be ready to exit on my stop. I told myself over and over which subway to take and where to get off. But no matter how many times I told myself, I consistently had doubts I was on the wrong train heading towards the opposite direction of where I wanted to go. Thankfully I was right; and even if I did get lost, I could always take a cab. They’re everywhere, after all. 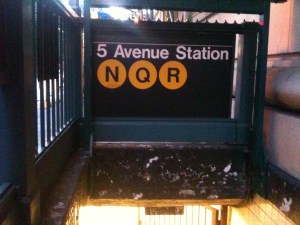 Taking the N subway to Time Square. Or was it the R train? 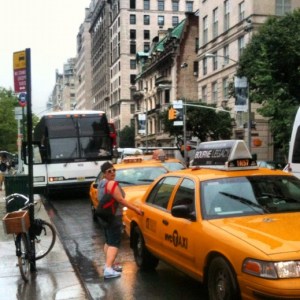 This is how you catch a cab in NYC. (Queerie)  Flaunt your sexiness and they shall come.

BlogHer Conference – Lastly, the number one reason I went to New York; to attend the BlogHer conference. From Obama, to Martha Stewart, to Katie Couric, to amazing sessions, to meeting awesome bloggers, to Queerie’s popular and successful days of speaking, to the parties and much much more. I understood on a deeper level what Queerie meant when she told me how inspired she left last year’s conference. I especially was inspired by the Latina bloggers. Stories and struggles similar to mine made me believe in all the possibilities I can have for myself. I’m excitingly looking forward to next year’s conference in Chicago. But I’m mostly looking forward to what I can do between now and then. This year before the next conference is my empty canvas, and I plan on painting and decorating it with passion and exuberance. I’m a small town girl that comes from a poor background. New York had always been just a dream. But now it’s my reality; all because I wanted to write. And write is what I will continue to do. 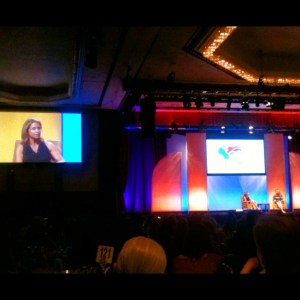 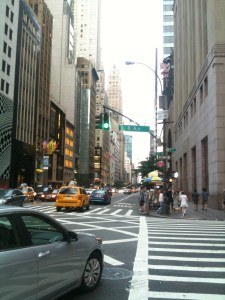 I got lost four times while I was wandering around the streets. Not bad for a first timer. 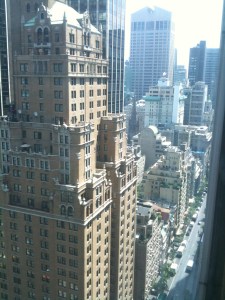 One of my favorite photos. View from the hotel’s 28th floor. 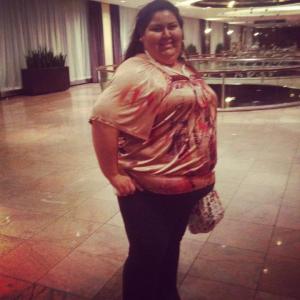 Last night in NYC. I was on my way to a BlogHer party. Goodbye, New York. It was all my pleasure.

P.S. The flight home from JetBlue Airlines was much more comfortable than Virgin America. I’m absolutely flying JetBlue from now on!