Plus-Size Models Make You Fat, or Why I love Velvet D'Amour and Vogue Italia

Vogue Italia recently published a glorious and sexy spread featuring three plus-sized models lounging around in lingerie looking ravishing (images below and here). Instead of celebrating the presence of amazing breasts as people should have, there were protests over the images and their effect on society. It turns out that many people think seeing plus-sized models in magazines will turn people fat.

Now here I was thinking that it was my utter laziness and tendency to consume mass quantities of food that made me fat. I had no idea I could eat all the McCasseroles I wanted as long as I stayed away from Plus Magazine or any Lane Bryant catalog.

If only someone had told me this earlier. Instead, every diet doctor, fat camp counselor and family member who had a stake in me losing weight told me I had to stop eating and start running, preferably while hating myself. Instead of blaming my eating disorder and cutting addiction on anorexic thin, waif media images, I should have been blaming my excess pounds – the obvious root of my unhappiness – on Rosanne Bar, Oprah Winfrey and Ricky Lake. I did, after all, watch a lot of their shows as a kid and they all are plus-sized (or were in the case of Oprah).

Sound ridiculous? That’s because it is.

Yes, we as a society absorb that which is fed to us in the media, but what is fed to us 99% of the time is an unobtainable image of beauty that is often unhealthy and unnatural, caused by anorexia and drug usage. Yes, like every person who is extremely fat isn’t injecting insulin for diabetes, I realize that every person who is extremely thin isn’t injection heroine for weight loss, but the fact remains that it is just as unhealthy for an overweight person to starve to become thin as it would be for a thin person to gorge to become fatter. Yet we praise starvation in our society and ridicule those who overeat, even if they have as gorgeous and perfectly maintained bodies as these women from the Vogue Italia plus sized shoot. 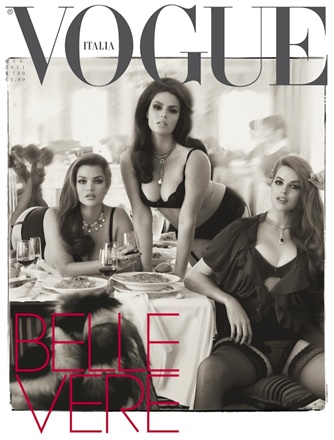 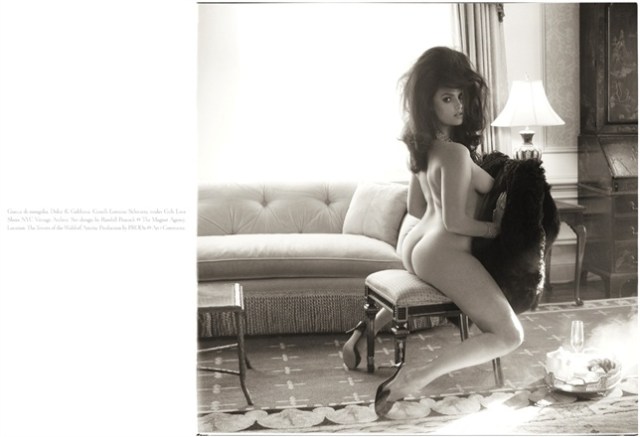 Years ago, I contacted famous plus-sized model Velvet D’Amour for an interview for Curve Magazine. The interview never went through as planned, as our schedules never matched, but I am on Ms. D’Amour’s press list and occasionally get updates about her professional life. This morning, that update included an interview that Ms. D’Amour did with Frockwriter (that ended up on the Huffington Post and Jezebel, among others) about this very topic.

A fashion veteran who has dealt with many snide comments about her size, Ms. D’Amour said in her interview:

The concept that fashion magazines are a reference guide of health to their viewers, seems only rarely pertinent on occasion, when we witness an exceptionally thin model, and inevitably whenever we possibly include a slightly curvy model. The reality that cultural pressures are one of the factors involved in eating disorders cannot be dismissed, though the notion that someone leafing through a magazine witnessing a plus size model has a sudden urge to down several thousand pizzas in the hopes of gaining a few pounds, is rather laughable at best. Were the inclusion of plus size models to spur viewers to gain weight, the inverse of that logic would mean (given the dearth of rail thin models in magazines), that the entire world would be emaciated, versus fat.

We need to start looking beyond the simplistic and dig deeper. If you want to have a health debate, then let’s tackle mental health, which is the stimulus, more often than not, affecting one’s physical health. If we start to include a major cross-section of our society within the revered pages of fashion magazines, fat women, emaciated women, women of colour, aging women, differently-abled women, small women, you name it – then we can turn the tide against the overwhelming sense so many women suffer from not being able to live up to this exceedingly stringent, highly unattainable beauty ethic we currently subscribe to.

I’ve frequented Velvet D’Amour’s website and Facebook page many times and have seen multiple pictures of her on the internet, yet not once did I think, hmm, I should gain weight so I can look like her. Instead I thought, wow, she’s bigger than me, yet I find her sexy, which means there’s a chance people also find me, even at my weight, sexy.

Plus-sized models don’t encourage women to gain weight, they give bigger women a much needed chance to see themselves as sexy and full of worth.

Lauren Marie Fleming is a writer, speaker and motivator known for her intimate, informative and often hilarious look at sex, relationships and body-image. Lauren runs the critically-acclaimed QueerieBradshaw.com blog, writes for major news sources including VICE, Nerve, Huffington Post and Curve, and is the author of her memoir Losing It: My Life as a Sex Blogger. In 2013, Lauren founded Frisky Feminist Press (FriskyFeminist.com) as a way to enhance conversations about sexuality through educational guides, online classes and entertaining publications. A law school graduate, Lauren has spoken all over the United States and is internationally recognized for her dynamic, engaging style. In everything she does, Lauren’s goal is to educate, remove stigmas and encourage people to achieve their desires.
View all posts by Queerie Bradshaw →
This entry was posted in A Good Fit, Beauty, Essays, Fashion, Featured, Off Our Chests, Opinions and tagged body image, fashion, fat, featured, plus-size, rant. Bookmark the permalink.

6 Responses to Plus-Size Models Make You Fat, or Why I love Velvet D'Amour and Vogue Italia