PMS Literally Makes Me Want to Die, aka Why I’m Downing Vitamin D and Taking Days Off

Once a month, I have a day (or two or three) when it’s impossible to get out of bed, impossible to think, impossible to step one foot in front of the other. That day happens like clockwork and even though I know it’s coming, the pain hits me like a tidal wave, burying me in the sands of time, lost on a beach alone with just a child’s toy shovel to dig myself out.

Doctors call it PMS. I call it misery.

Premenstrual syndrome (PMS) (also called PMT or premenstrual tension) is a collection of physical and emotional symptoms related to a woman’s menstrual cycle. While most women of child-bearing age (up to 85%) report having experienced physical symptoms related to normal ovulatory function, such as bloating or breast tenderness, medical definitions of PMS are limited to a consistent pattern of emotional and physical symptoms occurring only during the luteal phase of the menstrual cycle that are of “sufficient severity to interfere with some aspects of life”.[1] In particular, emotional symptoms must be present consistently to diagnose PMS. The specific emotional and physical symptoms attributable to PMS vary from woman to woman, but each individual woman’s pattern of symptoms is predictable, occurs consistently during the ten days prior to menses, and vanishes either shortly before or shortly after the start of menstrual flow.

That’s me. I’m that girl. I’m part of the 85% of people who get really fucking sad and pissed off and physically ill once a month.

And I’m tired of having to pretend like it’s not happening.

When people think of PMS, they think of some “irrationally” pissed off woman, probably conjured in conjunction with a male comedian’s skit about the ridiculousness of his wife or girlfriend’s “extra-sensitive” emotions. 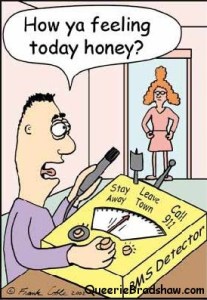 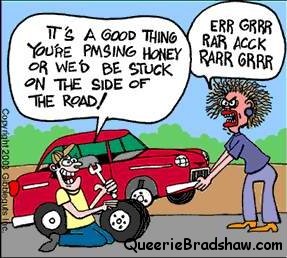 But for me and the many other women I know that suffer from PMS, it’s not a joke, it’s a valid emotional response to a physical change. Jokes about PMS, or comments blowing a woman’s emotions off to “simply” be PMS, invalidates her legitimate feelings and minimizes, even ridicules, her right to have those feelings, no matter what time of the month it is. 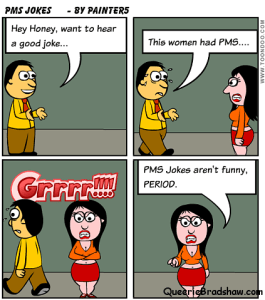 Far too often I see people use “PMS” for justifying why the women in their lives are mad at them, instead of recognizing that a lot of the time all PMS really is is a lack of patience for the bullshit we put up with the rest of the month.

I’ve always wondered, what if PMS is just a lifting of a filter. A way for our bodies to show us how much we as women emotionally withhold and abstain from sharing simply because emotions are seen as weak and unneeded in our male dominated society. A time for us to actually be more in touch with ourselves, our bodies, and the physical and emotional feelings we naturally have. 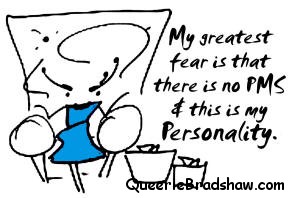 PMS always makes me reevaluate the relationships in my life, check in with how I’m actually feeling, see what really makes me happy, instead of holding back and clinging on like I tend to do the rest of the month. Part of me loves that emotional connection with myself, but usually I don’t like the answers to the questions I ask my body as it swells and cramps, discarding yet another reminder of how hard it can be to be a woman in this world made for men.

It shouldn’t be a surprise, I’ve been through a lot this year and it just keeps coming (Side Note: Fuck Cancer). Add that to a clinical depression that comes and goes in and out of my life as it pleases, then triple all of that with PMS hormone swings, and it’s a miracle I get out of bed in the morning.

Granted, some days I get right back into bed, or even worse spend the morning crying on the bathroom/kitchen floor wishing it all would just go away, but it’s the baby steps that keep me going these days. Baby steps. 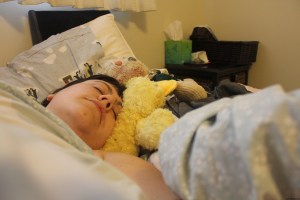 Would you want to leave this bed?

So, I’m popping Vitamin D like candy (literally, it’s tasty gummy candy!), acknowledging that PMS is an actual physiological change in my hormones that I can’t control just by ignoring it and taking days off when I need them. Even from this blog, which I love so much and miss when I’m gone. 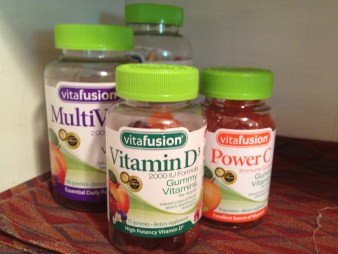 Gummy vitamins: Not just for children. Also for adults that occasionally act childish.

Bonus Material: Check out this Quickie with Queerie video made to accompany this post:

Lauren Marie Fleming is a writer, speaker and motivator known for her intimate, informative and often hilarious look at sex, relationships and body-image. Lauren runs the critically-acclaimed QueerieBradshaw.com blog, writes for major news sources including VICE, Nerve, Huffington Post and Curve, and is the author of her memoir Losing It: My Life as a Sex Blogger. In 2013, Lauren founded Frisky Feminist Press (FriskyFeminist.com) as a way to enhance conversations about sexuality through educational guides, online classes and entertaining publications. A law school graduate, Lauren has spoken all over the United States and is internationally recognized for her dynamic, engaging style. In everything she does, Lauren’s goal is to educate, remove stigmas and encourage people to achieve their desires.
View all posts by Queerie Bradshaw →
This entry was posted in Confessions, Essays, Featured, Headline, Off Our Chests and tagged cancer, depression, featured, life, periods, personal, PMS. Bookmark the permalink.

4 Responses to PMS Literally Makes Me Want to Die, aka Why I’m Downing Vitamin D and Taking Days Off