Public Sex With My Plus-Size Body

Ever since my creative sexual imagination began, I have not been able to stop fantasizing about having sex in any place at any time.  I would fantasize about having sex on a hammock swinging side to side, on the beach rolling around in the sand, in a closet at a friend’s house party, and wherever I could think of that would give me a rush of adrenaline. But the one fantasy that keeps playing over and over in my head is having sex in a public bathroom. I don’t know why. Maybe it has to do with an early memory of watching a dirty movie of a couple having bathroom sex when I was a kid. It looked exciting and fun. 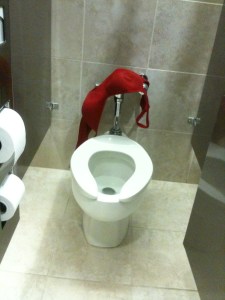 I may have a creative sexual imagination, but I’ve only played them out in a bedroom. I’ve shared my fantasies with someone I once dated and he absolutely loved the idea of having sex in a public bathroom. We talked about it a couple of times and thought about where we would go and when we will do it. I’d fantasize about us going out to dinner with friends. I’d excuse myself from the dinner table and a minute later he’d excuse himself and comes find me in the restroom waiting for him. The thought of it was so much of a turn on that I seriously contemplated going through with it.

But when it comes right down to it and actually thinking about doing it, my insecurities swell up and I back down. I already have fears of not being able to fit in restaurant booths because of my size 28 body, so what makes me think I can have raunchy and exciting sex in a public bathroom. As strong as I put myself out there to be, I still have many insecurities about my size. I’m afraid to be around children because they might call me fat because their parents teach them that. I’m afraid to sit in a crowded bus and be told I take up too much space. I’m afraid that in any spontaneous argument with a stranger I may get in to, their first attack of defense would be to insult me because of my size.

Society says that a person is defined by the shape of their body; that our worth in value is determined on what we look like. Complete bullshit. Yes, there are great programs out there (Dove) that encourages positive body image but they are nowhere near the fast pace society has taken. It’s up to us to build that confidence and to allow ourselves to feel sexy and beautiful. 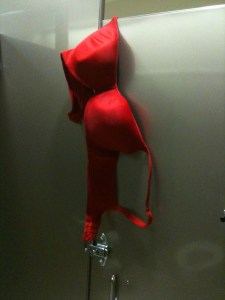 Come on! Admit it! You know you want to try it!

I once remember telling Queerie Bradshaw that I wished I was as confident as she was performing her burlesque shows. She would get up on stage and wear such cute outfits that I could never have the courage to wear. She replied by saying, “Just act like you’re sexy and beautiful and you will believe you’re sexy and beautiful.” And that’s what I try to tell myself now. I’m an able bodied person who can do anything an average size person can do, except I’ll probably run a little slower. So the next time I’m dating someone and get the urge to make my fantasy come true, the only reason I’ll back down from having sex in a bathroom will be because I think it’s too dirty and not because of my sexy and beautiful voluptuous size!