My friends and I went to a drag queen bar the other night and it made me wonder why people do drag. I just don’t get it. I thought you might be able to explain.

Simple answer: People do drag because it’s so much fun.

I used to occasionally do drag. I can’t find pictures of it, which makes me really sad, but I was Butch Cassidy and I had the “Ass Dance Kids” as my back-up dancers. Butch was offensive and had a giant styrofoam cowboy hat. I had a blast and so did my friends who performed with me. 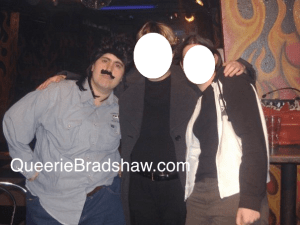 Ooh, I found one, just not performing.

This is Bianca del Rio. She’s a bitch. 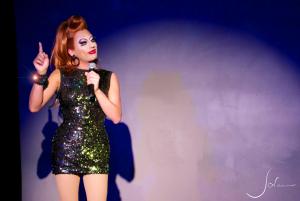 However, R, the person who created Bianca, the person that lives in that body most of the time, is a really nice guy. He puts on the persona of Bianca del Rio and he’s enabled to be a catty bitch in a way he isn’t in real life. Just like Sean Connery probably wasn’t as cool as 007 in real life, couldn’t drive as fast and might not even like a martini, shaken or stirred.

Or maybe a bit more like the Jersey Shore, with all that make-up and extreme exacerbation of gender norms. 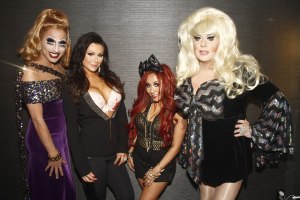 (Have you donated to see Bianca del Rio in a film yet?)

Gender is complicated and fun to mess with. Drag allows that all to come up in an often absurd way. Drag allows for over-the-top performances, gives a person an opportunity to go to an extreme opposite of who they may be in real life.

That said, many drag performers are also trans* in some form, so many people who do drag do so to embrace the gender the are, not the gender they were born into. Still, drag is a performance and often the difference between someone presenting as one gender in life is a lot more subdued than the gender – or personality – presented on stage.

So the answer is, there are lots of reasons someone would do drag. Maybe it’s time to find your reason to try it out?

With facial hair and a sexy man-mullet, 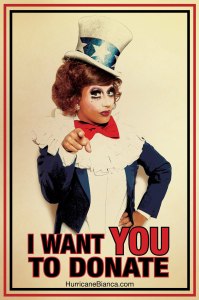 Lauren Marie Fleming is a writer, speaker and motivator known for her intimate, informative and often hilarious look at sex, relationships and body-image. Lauren runs the critically-acclaimed QueerieBradshaw.com blog, writes for major news sources including VICE, Nerve, Huffington Post and Curve, and is the author of her memoir Losing It: My Life as a Sex Blogger. In 2013, Lauren founded Frisky Feminist Press (FriskyFeminist.com) as a way to enhance conversations about sexuality through educational guides, online classes and entertaining publications. A law school graduate, Lauren has spoken all over the United States and is internationally recognized for her dynamic, engaging style. In everything she does, Lauren’s goal is to educate, remove stigmas and encourage people to achieve their desires.
View all posts by Queerie Bradshaw →
This entry was posted in Featured, Headline, LGBT/Queer Politics, Queerie Bradshaw, Queerie Me (Advice Column), Trans/Genderqueer/Gender Non-conformity and tagged advice, Bianca del Rio, drag. Bookmark the permalink.