Relationships: Settling For Crumbs When You Deserve Cake

It’s easy to tell people that my ex and I broke up because ze decided to stay in China and I decided to stay here and pursue my career. That’s a simple version of our breakup that works when I don’t want to get into the dirty details or admit that larger problems existed.

But larger problems did exist and my continual denial of them has started to feel detrimental to my process of letting go and moving on. I hold back the truth because I hold on to the hope that one day we will fix this broken thing and on that day I don’t want my friends or family pointing out how unfixable we are.

But we are broken and we are unfixable and I have reached that point where I wonder why I accepted so little for so long, why I settled for crumbs when I deserved the whole cake.

It’s probably because I got cake for awhile from DE. I got glorious triple tiered fabulously decorated cake with cream filling and homemade frosting. When things were stable, DE and I were beautiful, a thing to show off at a party, a couple that stood out in the crowd.

But turn up the heat and DE melted to mush, anxiety stricken and unable to function in all but basic ways. As each of our own issues escalated, ze shut down and lost all ability to cope. Ze quit making decisions, gave up all hope and started a vicious cycle of self-loathing, all of which allowed zir to drop farther into a world of despair, dragging me out of my own pit of misery and into zirs.

For so long I tried to fix zir problems instead of dealing with mine.

I eventually got to the point where everything hurt so much and my depression was so heavy that it felt like my ship was sinking. Yet, I kept paddling, I kept siphoning off water because I knew that I needed to make it to shore, that some day I’d be standing on solid ground again. I knew that I wanted to survive. I wanted us both to survive. But instead of helping me paddle, DE just jumped ship and resigned zirself to drowning. So I paddled for two.

From the beginning DE told me ze was a bottom. Ze wanted to be dominated, pleasured and taken care of. I realized too late how little ze was willing to give in return and how much this sexual preference would bleed into our life outside of the bedroom. In zir defense, DE had spent a lot of time taking care of zir last partner and deserved a bit of pampering. But in my defense, so did I.

We both were two young adults going through a lot of rough shit, needing someone to help us out. Through my misery, I found a way to take care of zir but DE was never able to find a way take care of me.

When things in life got really rough, I left Portland and moved home.

I was dying inside, unable to breathe, choking on the massive lump that filled my throat every time I saw my brother, my grandfather, my father, my mother. Every time I remembered watching my grandmother take her last breath and everytime I prayed I wouldn’t soon be witnessing my brother do the same.

Yet during all of this, I still listened to DE cry every night on the phone about how miserable zir life was. I still sat through hours of sobbing about how difficult the entrance exam to business school was, heard how scared ze was of failing and how much pressure ze was getting from zir family.

DE rarely asked how I was doing and I rarely offered up any information. Our relationship had become a one way street.

Until one day I just snapped.

It was a week after my birthday – one that had been mostly ignored by my immediate family and almost completely forgotten by DE – and I had accompanied my brother to his second chemotherapy session. While there, the doctor touched his tumor, looked into his eyes and said the drugs weren’t working. My brother’s tumors were growing and he wasn’t going to make it unless they tried something new. 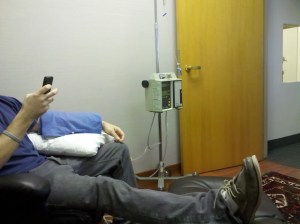 Keeping my brother company as he got chemotherapy.

That night, when DE called me crying about a lost wallet, talking about how the world hates zir and there’s no reason to keep going, I fucking flipped.

I am still broken.

I am still bitter that the one person who was supposed to love and support me through the hell I was going through was so absorbed in zir own self-pity that ze made my life harder. Instead of helping me stay afloat, DE was using me as a life raft, pushing me under so ze could catch zir breath.

Which would maybe be ok if ze actually ever got ahead, but despite a few weeks of futile tries at happiness – done only because I threatened to leave our relationship – DE was, and still is, drowning in zir own self-loathing misery, held down by shackles ze put on zirself.

I still get texts about how miserable DE is because ze can’t find a job. Nevermind I’ve been underemployed and searching for work for months. DE never asks about that. When I told DE that my brother’s cancer was spreading and things weren’t looking too good, ze replied with an illegible sentence of condolence and then TWO PAGES about how sad ze still is about losing zir dream job over a year ago. 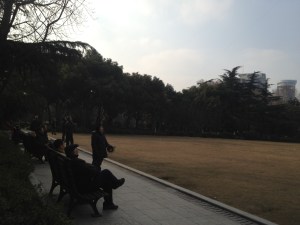 The view from the bench where we had a fight about zir attitude while in China. Despite our fights, I still loved my visit to China and I especially loved this park. We were good for those days, better than we had been in a long time. Better than we’d ever be again.

So I’ve begun to ask myself what I’m getting out of this. Why am I still answering DE’s calls and trying to help keep zir afloat? Why am I still settling for crumbs when I deserve cake?

At first, love was the reason. I thought maybe I could help ze pull out of this misery and we could build a life of mutual respect and love for each other. When that failed, China was the reason. I’d bought my ticket, we’d planned our trip and I thought a change of scenery would bring some perspective and help turn zir attitude around. And while China was a happier time for us, it too eventually failed as well. Finally, desperation and lonliness kicked in and in one last grasp for air, I tried to win zir back, convinced I had simply been too picky and judgmental. But that was a lie, so it too failed.

Now love has faded, China has passed and I am no longer desperate and lonely. It is time for me to stop accepting the crumbs of our mutilated relationship and start searching for the cake I desserve.

My friend Talia summed it up rather well when she said, “It’s hard when you want to build a life with someone and then realize you are the only one bringing along the tools.”

I’m paddling. I’m paddling hard. And on days I feel like I can’t paddle any more, I turn to friends to paddle for me. And while the shore keeps getting farther and farther away as jobs keep turning me down and my brother’s cancer keeps spreading and life keeps happening, I keep paddling because I know one day I’ll be back on solid ground again.

And until then, I’m at least going to try to enjoy the scenery.

I deserve someone who comes bearing cake, ready for a feast.

Lauren Marie Fleming is a writer, speaker and motivator known for her intimate, informative and often hilarious look at sex, relationships and body-image. Lauren runs the critically-acclaimed QueerieBradshaw.com blog, writes for major news sources including VICE, Nerve, Huffington Post and Curve, and is the author of her memoir Losing It: My Life as a Sex Blogger. In 2013, Lauren founded Frisky Feminist Press (FriskyFeminist.com) as a way to enhance conversations about sexuality through educational guides, online classes and entertaining publications. A law school graduate, Lauren has spoken all over the United States and is internationally recognized for her dynamic, engaging style. In everything she does, Lauren’s goal is to educate, remove stigmas and encourage people to achieve their desires.
View all posts by Queerie Bradshaw →
This entry was posted in Featured, Headline, Queerie Bradshaw, Relationships and tagged boi, bottoms, emotions, Family, featured, femme, love, personal, personal story, relationships, Sex, shame, tops. Bookmark the permalink.

15 Responses to Relationships: Settling For Crumbs When You Deserve Cake