Relationships: The One Who Flips You Upside Down

I’ve been thinking a lot about relationships lately and how powerful they can be. Anyone can have a plan of their future and picture how they want to spend their lives, but suddenly they fall in love with the “one true love” and everything is diverted. Queerie Bradshaw has written on this site about how people change so much when in relationships and she’s right to question herself as I question myself as well. I think a lot of us question ourselves as we go on with our lives and see everyone around us change. Sometimes it makes me wonder if I’m on the right path. It makes me doubt myself getting older, being the same single person, while others I grew up with are getting married and having kids. It’s one thing to have this plan of marriage and kids and fulfilling it early on; but what makes people who don’t have this plan suddenly change to accommodate it? I guess the answer would be their one true love.

I’ve experienced what I thought was my “one true love” and now I understand why people change. When I moved out of my very comfortable home to go away to college, I started to feel very independent. I started to realize I was on my own and whatever ideas of my life I had coming from a small town can change to whatever I want my life to be. So my ideas changed. I wanted to learn more, explore more, travel, write, jump from continent to continent and just be free. I wanted to feel (and still do) the world in my hands and not let a passing chance go by. Dating and love never came as quick of a desire to be this adventurous person I was planning to become. But I fell in love and it all changed.

I met him when I had just turned 26. I was stuck in the middle of my plan, working full time, paying off bills and still picturing that adventurous life I could see at the end of the tunnel. Without saying too much about him, I fell very quickly. Over the next on and off two years I continued to fall even harder. The more he told me beautiful things and made me feel like I was his number one, the more I put him in my life to be my number one. All I could think about was him. It didn’t matter what plan I had for my adventurous life, this is who I wanted to be with. There was absolutely no doubtful feeling otherwise. It completely felt meant to be; even when we would argue and I wouldn’t hear from him at all. There was nothing that could interrupt the way I felt about him. Not our arguments and not the gaps between the times we wouldn’t speak and didn’t see each other. He was it for me and that’s all there was to it. 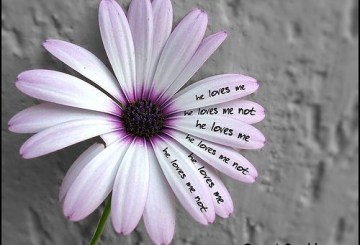 But like many heartbroken people who come to their realizations of “I deserve better than this.” I knew I had to stop. There were too many empty words for me to count and too many hopeful moments broken. And even when I thought I was over him and we could be just friends (the infamous phrase) I told him that we belonged together but his dumb ass just didn’t know it yet. I told him that as much as I would wait for him to realize that we belong together, he wouldn’t wait for me; and that’s the 100% pure emotion I felt at the time. It took me a really long time, probably a whole year, to realize that everything I wanted from him was not going to happen at all. It’s been almost three years since we met and as recent as three months ago that we argued. It was mostly me doing all the arguing. I didn’t understand how he could say he misses me and how great he thinks of me if there’s nothing to be done about it. There was no point in him telling me so many beautiful things that make me want to run to him if he’s nowhere to be found. It just wasn’t fair.

I know now that I’ve moved past this whole thing with him because when I think of him, I wish him well. When I say my little prayers at night (yes, I do pray contrary to my non-existent beliefs in organized religion) I pray for him to find happiness. I pray for him to find someone who could love him as good or better as I loved him. And the ironic thing about falling in love with him is that I pictured a life completely different for myself and him than the adventurous plan I had for my future. I was talking to my niece about how hypocritical I sounded talking about how he was the one I could marry and have children with; a little blonde blue-eyed girl I dreamt of in particular. I have never said such a thing about anyone and here I was in love lost land completely turned upside down from the life I had planned for my single self.

I still feel the same way about my future plans. They’re there because I want to still be this adventurous person. But at the same time I don’t want to lose myself if I ever fall in love again. I think that’s the compromise we all make when we find the one we want to spend the rest of our lives with. At some point, nothing else matters except the one you love. And that’s how strong love should be. Otherwise, what’s the point? I’ll get to my adventurous life someday; even if I’m head-over-heels in love or heartbroken. As the saying goes “’Tis better to have loved and lost / Than never to have loved at all.”