Sex: I Was Afraid Of Boners

My Catholic upbringing and my older female influences had a huge part in the way I felt about sex. It was set in stone that I’d lose my virginity the night I got married. And I was proud of that. But when I was in college, I met a really cute boy. And that stone was nowhere to be found. It’s funny how all your beliefs and way of thinking changes when you fall in love. Or, when you think you’re in love. 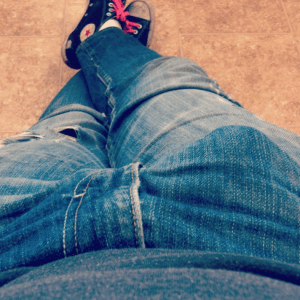 It took one boner from a guy I was dating in high school when I was 16 years old to gross me out enough to never want to date again. I never wanted to be touched after that. I was so set in my little innocent ways that the thought and idea of sex never entered my mind. I knew sex was a thing I would only think about if I were ever to get married. It was completely off the table during my high school dating life. So you can imagine my shock and surprise the very first time I felt my date’s boner poking through his jeans rubbing up against my inner thighs while we were making out.

We had only kissed once, a week before that night. A quick and innocent peck on the lips is all it was. On the “night of the boner” (we shall call it), he came to my house at dusk and we sat outside on my porch just talking about anything. My little sister kept peeking through the window blinds from inside the house to see what we were doing, so as the night got darker we took our conversations to the side of the house where it was a little more private. We hadn’t been together long. We weren’t even “boyfriend and girlfriend.” We had met in chorus class and often sat on the back row where our eyes would wonder around each other and then finally meet. Light and flirtatious small talk turned into switching phone numbers and having lunches together. By the night of the boner, it had been about six weeks into our innocent (soon to be sinful at the time) crushing-on-each-other relationship.

It had been a little chilly that night and I felt his arms wrap around me over my lower back as we were standing face to face. I put my arms over his shoulders reacting to him pulling me in closer. He leaned in and started to kiss me. But this was a different type of kiss. I could feel his tongue splitting my closed, puckered lips open, rubbing his tongue on mine. I didn’t pull away immediately, but my mind told me to. I liked the way it felt, so I let him continue. My mind told me we should stop but my body wanted to let him keep going. So I gave in. I gave in to his soft lips and caressing tongue. It was the first time my body had ever felt this way. I wanted to stop but keep going at the same time. 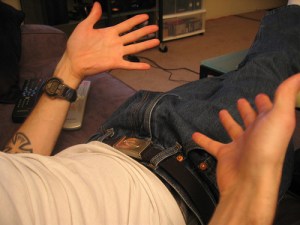 As he held me tighter while we were kissing, I felt what I could only suspect was his hard penis poking through his jeans rubbing between my upper inner thighs. I quickly lost grip of his lips and gasped in surprise. Before he could ask me why I stopped kissing him, I told him my mother was going to be home any minute and he had to leave. One last slobbery and wet kiss for the night and he was gone. I went straight to my room in such a panic over the odd feeling of his boner poking right into me. I started to ask myself “Oh my god can I get pregnant like that? Am I going to have to get an STD test? Am I still a virgin?!”

Yes, these were the actual questions going through my head. Keep in mind how innocent and pure I was at the time so you could understand my frantic thoughts.

The next day he called and asked if he could come to my house again. I told him he couldn’t because I was busy. I wasn’t busy at all. I was avoiding him. I was avoiding the one-eyed monster. A couple days later he asked if I wanted to go to a party with him. I kept denying his invitation until he finally convinced me to go as long as he promised we’d only stay for a little while. I also agreed to go on the one condition that we don’t make out anymore. He was confused by my request but agreed to it. I slowly distanced myself from him little by little. I didn’t have the courage to tell him that his hard penis scared me. Instead, I ignored him until he finally gave up.

Feeling his boner literally frightened me. I can laugh about it now, because it’s an absolutely ridiculous memory, but at the time I was utterly scared. Maybe it was the lack of sex education and not understanding how our bodies react when we are physically ready to have sex that confused and scared me. I had already known about our reproductive organs from grade school, but I also think it was the repetitive speeches of “save yourself until marriage” my mother and older female influences implemented in me. I dared not go near a penis until four years later when I was 20 years old in college and faced my fear, but like I said, that’s another story for another time.