It’s fair to say that I’ve slept with a fair amount of men to the point where my sexual curiosity makes me wonder about a lot of things. Prior to my active sex life, I would be very quiet and shy whenever my girlfriends would talk about sex. Being the inexperienced one for so long, there was nothing I could add to their conversation. But now having had a colorful background of lovers, I am now able to start and participate in sex conversations with my friends. So my curiosity went straight to penis stereotypes. 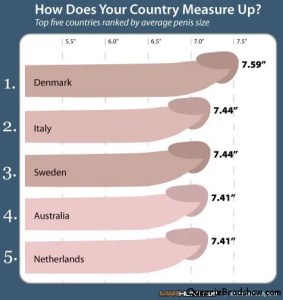 I asked them what they thought about penis stereotypes according to race and if there was any truth behind it. I wasn’t surprised at the different conclusions we came up with because of obvious understandings that we’re all different people and come in different shapes and sizes who shouldn’t be judged by the race we are. However, it definitely was fun talking about it and here’s what we came up with:

Jealous of my two friends having slept with an Italian stallion, they both agreed that this stereotype fits perfectly with its reputation. I asked what the difference was between this stereotype to the others and one friend answered, “They don’t call them stallions for nothing. It was bang, bang, bang, bang, bang! Hard and rough until I came. And I came a lot.” I sat there with my mouth open thinking “I gotta try one!”

This stereotype resulted with a three out of five agreement where three of us agreed the Asian partners we’ve had between us all have had smaller penises. This included Chinese, Japanese and Pacific Islander. However, knowing that two out of the five had average sized penis, we know this stereotype isn’t always true to its reputation. Although we all agree this kind of lover was nice and sweet.

The Big Black One

I think I’m the only one out of my friends who agrees this isn’t always true. I was the only one to say that the men I’ve slept with in this race were not the size I was expecting; even one who was six feet and four inches tall. Both men I slept with had an average size penis and didn’t dissatisfy me one bit. This proved to me that size didn’t matter.

I’m not sure I’ve heard a penis stereotype for Latin men other than them being sensual and romantic lovers. I also wouldn’t know because I’ve never slept with one; which is a funny thing because I’m Latina. It’s not that I’m avoiding them, it’s just that the opportunity hasn’t presented itself. However, discussing this with my friends it seems the size can go from small to painfully big.

I had not heard too much about the White boy stereotype other than a few whispers here and there that they were big and thick. As far as I know between my girlfriends and me, those whispers are true and are gaining quite a reputation. And oh boy do I feel it. Both White men I’ve been with were big and thick. An adjustment that was difficult at first but definitely fun afterwards.

Even though I think it’s silly to judge someone’s gentile characteristics based on their race,  this was a fun conversation to have and explore between my girlfriends and me. I can definitely see how these kind of stereotypes get formed but it doesn’t truly define one individual. We’re all built different and I can for sure say that big or small, the size doesn’t matter, in my opinion. It’s all about how you use it!

One Response to Sex: Penis Stereotypes