[Editor’s correction: while the production has a queer members, the troupe is not a queer troupe per se.]

This February, while I was speaking at IvyQ at Brown, I met an amazing queer boy named Alp. Alp and I have since stayed in touch, and the last time I went to NYC, we ate, drank and danced together and had a gay ol’ time. 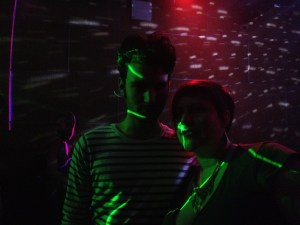 During our rebel rousing, Alp talked about a play he is helping with in NYC called Doctor Faustus Lights the Lights, a Gertrude Stein pieced turned electro-rock/rave musical, and I was immediately intrigued. First off, Gertrude Stein was a hot lesbian and I fantasize about being Alice B. Toklas. Since Stein wrote the original piece, I can only assume the libretto is gorgeous. Second, electro-rock/rave musical set in 360 degree immersion, meaning the audience is in a dance/mosh pit in the middle while the actors, well act, around them. Sign me up. Third, it’s queer theater. We need to support queer theater. 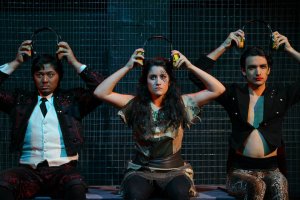 Unfortunately, I’m going back to NYC for BlogHer the day after the show closes, but if you’re in NYC from July 20-28 you definitely should check this production out. For more photos and a video, go to the production’s website. 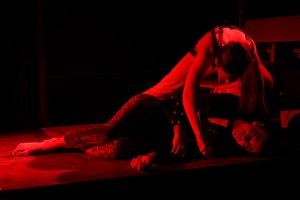 Lauren Marie Fleming is a writer, speaker and motivator known for her intimate, informative and often hilarious look at sex, relationships and body-image. Lauren runs the critically-acclaimed QueerieBradshaw.com blog, writes for major news sources including VICE, Nerve, Huffington Post and Curve, and is the author of her memoir Losing It: My Life as a Sex Blogger. In 2013, Lauren founded Frisky Feminist Press (FriskyFeminist.com) as a way to enhance conversations about sexuality through educational guides, online classes and entertaining publications. A law school graduate, Lauren has spoken all over the United States and is internationally recognized for her dynamic, engaging style. In everything she does, Lauren’s goal is to educate, remove stigmas and encourage people to achieve their desires.
View all posts by Queerie Bradshaw →
This entry was posted in Art, Stuff We Love, Theater and tagged Gertrude Stein, musicals, queer. Bookmark the permalink.

2 Responses to Stuff We Love: Doctor Faustus Lights the Lights by Gertrude Stein Performed by Theater Troupe in NYC