Posted on November 12, 2012 by AlannaLaFemme

TRIGGER WARNING: This piece contains discussions of sexual violence and assault. Some readers may find it triggering.

I found out a week ago that I am friends with a rapist.

My hall-mate brought our friend (a quiet, unassuming boy who lives in our dorm) home after a party two weeks ago, and they were making out in their underwear in bed. It started, she said, as a pleasant experience. Then, without asking, he stuck his penis in her vagina. She pushed him off, and told him NO. He did it again. She pushed him off. He did it again. He eventually left her room, but not after shrugging off her attempts to talk about “the incident.”

Unfortunately, we live in a society where rape is discussed as if one form or another is more legitimate (thanks, Todd Akin). This guy probably thinks he isn’t a rapist, and some people reading this might agree with him. But we here at QueerieBradshaw.com know that rape and assault come in many forms, and not all (or even a majority of) rapists are strangers in dark alleys. Let’s just be clear: nonconsensually engaging in sex with another person is rape. This man is a rapist, and my friend was raped. She knows it, even if he refuses to acknowledge it. 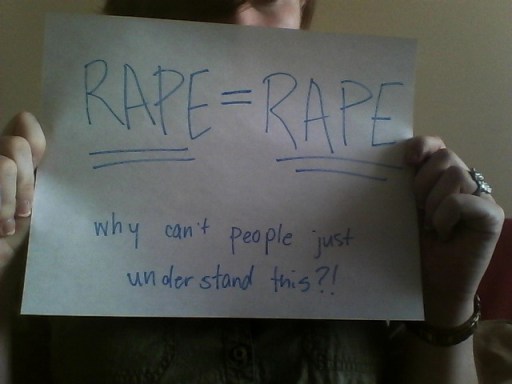 This is not the first time my friend has been raped. Because three men have refused to understand the word NO, she lives with a bone-deep fear of sex, a need for emotional validation, and a devastatingly low self-image.

I was friends with this particular man — we had danced together at parties, and had many pleasant dinner conversations. He raped my friend. And now, I am afraid. At first, I dealt with it by just avoiding being around this guy. Then I started feeling uncomfortable around my straight male friends, particularly after one of them drunkenly came on to me (grabbing at my waist while he attempted to murmur sweet nothings in my ear) at a party that same week. I’m reminded more than ever of the potential danger that lies in walking down the street at night, and of the possibility that my friends — “nice” guys, my close friends — might not, in the heat of the moment, understand the word NO. Despite my best efforts, I am still afraid.

The night I found out about what happened, I had a nightmare. I was at a fraternity party, dancing alone in the back of the room. A man came up to me, and grabbed my arm; I pushed him away, focused on my own dance. He leered at me, and grabbed again, twisting my arm behind my back. I ran from him, knowing with the bone-deep knowledge of instinct that he would hurt me if I didn’t run. The next scenes of my dream were fear — the faceless man had gathered friends, and they were hunting me like an animal, intent on punishing me for my disobedience. I remember very little between the middle and the end of the dream, but I know that it ended with me, mostly naked, clothes torn, standing in the middle of a circle of men. These men were no longer faceless. They were my friends. And they were laughing at me, grabbing me and passing me around as I tried in vain to run, to fight, to resist. I woke up sobbing, feeling their hands on my skin as the last moment of the dream blended into my first moments of consciousness.

I am incredibly, incredibly lucky in that I have never been raped.

I have had nonconsensually unprotected sex with men because they wouldn’t put on a condom; I have been pushed, pulled, pinched, and groped by strangers; I have been catcalled at all hours of the day; I have had cars follow me home, their occupants screaming obscenities out the window. I once had a group of fifteen men in masks chase me and one friend from the middle of our small town all the way to my front porch—I still thank whatever protective force is out there that my mother was home, and called the police when we burst through the door.

But I have not been raped.

However, I always have the fear of rape in my chest, running through my legs, pounding through my veins, and sticking at the back of my throat. 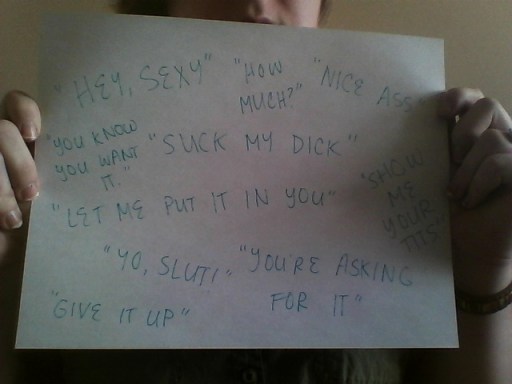 I dream about rape and wake in a cold sweat of fear because rape is a part of my life. I am not a survivor of rape, but I live in a world where both macro and micro-violence towards women occurs on an epidemic scale, and where I can be friends with a rapist and not even know it.

I found out last year that one of my family members was raped. She was raped because her high school boyfriend was jealous, and wanted to punish her for looking at another man. I was devastated; emotionally wrecked when she told me. But I was not surprised.

We live in a world where stories of surviving rape are unsurprising.

Why is that? One answer lies in the numbers. We wake up every morning and walk out into a world where (a minimum estimate of) one in four women experiences rape in her lifetime. A statistic of one in four should shock and appall us, and these statistics don’t even include (a) rape by same-gender partners, (b) rape that does not include intercourse, and more obviously, (c) rape of people who are not women. We’re not surprised, although we may be absolutely devastated, when our mothers, sisters, and friends tell us their own stories of assault — because, statistically speaking, 25% of women in our lives have been raped and 70% of women report experiencing sexual violence at some point in their lives. But numbers only cover the violence that is reported, and most survival stories are never told.

So how can we stop this rape culture? And, on a more personal note, how can I stop myself from being afraid?

I do not have easy answers—nobody does. But I am sure of this: nobody – no matter their gender or sexual orientation – should live with the concrete possibility of sexual violation hanging over their head. We should not have to live with the fear that we are next in line.

Do what makes you feel powerful, whether it’s taking a self defense class or writing letters to local politicians or volunteering at a shelter. Don’t stand by when your peers make jokes — rape jokes are just another form of micro-violence that enable us to minimize the actual act of rape. Advocate for consent in every way you can (because it’s not just necessary, it’s sexy — why don’t people understand that?!). If you know friends or family who are struggling with sexual assault, find local resources who can help them, and offer yourself as a sounding board. Trust their stories. Do not doubt the truth of survival. If you yourself are a survivor, our ears and hearts are open. Know that there is strength in numbers, and know that we are with you in your struggle.

Remember that it is okay to feel unsafe, even at your most powerful. Trust yourself and your instincts. There is no shame in dialing the phone for a friend to walk you home, and there is no shame in having a friend call you in the morning to make sure you made it home safely. Know that you are not less powerful for needing help, and we are here to look out for each other.

The Femme Shark Manifesto asks us to “believe in communities that heal hurt, apologize, listen to each other, and make things right.” If we can become that community — focus on becoming healers and listeners while recognizing our own mistakes — we can at least take one step towards making things right. We may even move from surviving rape culture towards the possibility of transforming it.

To learn all about me, see this post I wrote as an introduction to being a new contributor for QueerieBradshaw.com: http://www.queeriebradshaw.com/introducing-alanna-lafemme-our-latest-contributor-addition/
View all posts by AlannaLaFemme →
This entry was posted in Essays, Off Our Chests, Rants and tagged fear, micro-violence, personal, rape, sexual assault, sexual violence, survival, trauma. Bookmark the permalink.