Ten Words to Use Instead of Insane, Crazy, Lame, Gay or Retarded

Lately, I’ve found myself appalled at the derogatory language I use on a daily basis without even realizing it is derogatory.

That movie was so lame.
Woah, this line to Inn-N-Out is crazy.
Her outfit is totally insane.

I’m ashamed that – as someone who has bastioned the use of “gay” to mean homosexual, fabulous, happy or any of its actual definitions instead of an insult, and who quit using “retarded” a long time ago – it took a conversation I only by chance happened upon on Twitter for me to take a moment to even notice the issues with lame, crazy and insane (crazy and insane are words that degrade people with mental illness, and lame is an ableist term).

Oh well, we all have something to learn, and this was my lesson of the week. The only thing I can do is change my language from now on.

The problem is, how? Insane, crazy and lame are sadly an integral part of my vocabulary. When I tried to take them out, I found gaps in my conversation.

About a year ago, I tried to stop using “pimp” and found myself with the same problem. The minute I said no to pimp, it was all I wanted to say! What I did was find a go-to word to replace it, something I could quickly access instead.

For “pimp” that was easy, I was using it to mean “promote” so I just did a quick switch of the two words in my head. But I use lame, crazy and insane in varying ways, so a quick one word switch didn’t work for them.

Instead, I made a list of ten words to use instead, and I’m sharing them here with you all in case you too need some inspiration. Thanks to someone on Twitter (I don’t remember who but I thank you!) for helping me get started with “absurd.” 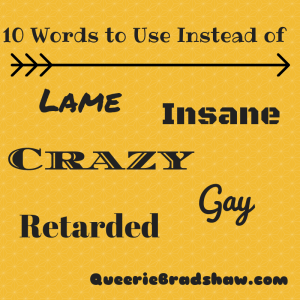 10 Go-To Words to Use Instead of Crazy, Gay, Retarded, Lame or Insane

Not only do I feel like I’m not degrading someone’s experience or abilities by using these words, I also feel like I’m making better use of the complex English language, instead of just relying on easy slang.

What words are you trying to avoid? What words do you use instead?

Lauren Marie Fleming is a writer, speaker and motivator known for her intimate, informative and often hilarious look at sex, relationships and body-image. Lauren runs the critically-acclaimed QueerieBradshaw.com blog, writes for major news sources including VICE, Nerve, Huffington Post and Curve, and is the author of her memoir Losing It: My Life as a Sex Blogger. In 2013, Lauren founded Frisky Feminist Press (FriskyFeminist.com) as a way to enhance conversations about sexuality through educational guides, online classes and entertaining publications. A law school graduate, Lauren has spoken all over the United States and is internationally recognized for her dynamic, engaging style. In everything she does, Lauren’s goal is to educate, remove stigmas and encourage people to achieve their desires.
View all posts by Queerie Bradshaw →
This entry was posted in Confessions, Featured, Politics, Words and tagged crazy, derogatory words, insane, lame, language. Bookmark the permalink.

8 Responses to Ten Words to Use Instead of Insane, Crazy, Lame, Gay or Retarded