The Familiarity of Emptiness, a.k.a. May He Rest in Peace

My good friend died the night before last and I hate the familiarity of this emptiness. 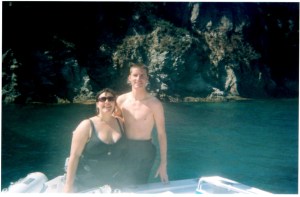 On a snorkeling excursion during an amazing weekend in Catalina. One of my fondest memories of him.

I hate how acquainted I am with grief, with this black hole in my soul, one that keeps sucking and sucking, compelling me to give up and fall in. It never goes away, you just learn to walk around it; or how to pull yourself out faster; or when you have the time and energy to just let go and fall in, embracing the cocoon of darkness.

With each loss, that hole gets bigger.

Three people dear to me in one year.

So far, I’ve been unsuccessful. 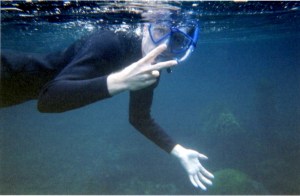 Pointing out two small sharks he saw, right before he screamed so loudly as one came near us and swam faster than I could imagine he could swim back to our boat.

Excited to feel like, after a year of mourning and two years of upheaval wading through the murky waters of my brother’s cancer, I was finally getting my shit together, finally putting my career and my productivity back on track.

Then that phone call yesterday threw me head first back into the abyss. 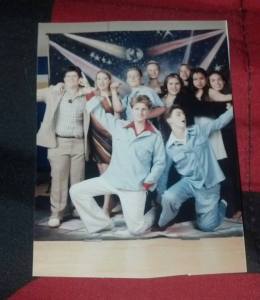 We went to quite a few high school dances together. He was always so fashionable .

The anniversary of my brother’s death is 14 days away and here I am, trying to figure out how to mourn the loss of a friend and a brother, a grandmother and a grandfather, the life I used to live, the lightheartedness I used to feel. All gone.

“What a year,” I said to my father this morning as I made tea, trying to wrap my brain around this new kind of grief, the kind that keeps compounding with each loss.

“You could say that of any year,” he responded, as I sat down at the table. “All years have their ups and downs.” I looked at my ever-optimistic father, angry that he could suggest that this year was anything other than highly abnormal.

I do not want this to be the kind of year that gets repeated. Ever again.

“Yes, they do,” I said defensively, protecting the optimist in me from the optimist in him, me needing to believe that things will never be this bad again, him needing to believe that everything has a silver lining and things are never as bad as they seem, “but you can’t tell me that this year was typical, in any way. The chances of me once again losing three dear people in less than one year is – hopefully – slim.”

“No,” he acquiesced,”you’re right. This has been a horribly rough year.”

I keep remembering the utter anguish in his voice when he called me after he heard that my brother had died. Through spastic sobs and heavy tears, his barely audible voice spoke of how terrible of a loss it was, a life gone too young and an inability to understand how a family survives losing a brother and son. He did not understand how I was going to make it through this.

I keep wishing he would have remembered how devastating that loss was, been able to remember how sorry he felt for me and my family, been able to see that his family and I would feel that same devastating loss if he was gone.

He was strong, but his demons were stronger, and when those demons came they demanded too much of him, blinded him from reason and yanked him down a dark path that led to a cell of solitary confinement that only he could see.

My brother’s disease ate apart his face. I touched it, the thing that rotted him from the inside out. Everyone could see it. There was no hiding his cancer.

His disease was visible only in his eyes, the tone of this voice, the posture of his body, and even then it took someone who knew him intimately to see past the wild outbursts, the cries for attention, the angry out-lashes, the uncontrollable attention deficit, to see the tormented soul that was fighting a lonely battle.

There is also a part of me who hates him for being so fucking selfish that he would put us all through this.

But mostly, I just want to wrap him in my arms like I’ve done so many times before, and remind him that he is loved, that his pain is real but that so is our love. I want to reassure him, like I had before, that even if he one day succeeded and killed himself, we would be so very very sad and angry with him, but that we would still love him.

And we do, wherever you are now, we still love you.

If you or someone you know is thinking about ending your life, call the National Suicide Prevention Hotline.

The suicide rates in LGBTQ people are horrifically high. If you want to talk to someone who understands the particular issues facing LGBTQ peoples, call the Trevor Project toll-free: 1-866-488-7386 (open 24/7)

Be kind, for everyone you know is fighting a hard battle. – unknown

Lauren Marie Fleming is a writer, speaker and motivator known for her intimate, informative and often hilarious look at sex, relationships and body-image. Lauren runs the critically-acclaimed QueerieBradshaw.com blog, writes for major news sources including VICE, Nerve, Huffington Post and Curve, and is the author of her memoir Losing It: My Life as a Sex Blogger. In 2013, Lauren founded Frisky Feminist Press (FriskyFeminist.com) as a way to enhance conversations about sexuality through educational guides, online classes and entertaining publications. A law school graduate, Lauren has spoken all over the United States and is internationally recognized for her dynamic, engaging style. In everything she does, Lauren’s goal is to educate, remove stigmas and encourage people to achieve their desires.
View all posts by Queerie Bradshaw →
This entry was posted in Essays, Featured, Headline, Off Our Chests, Personal and tagged Andrew, grief, personal, personal story, suicide. Bookmark the permalink.

4 Responses to The Familiarity of Emptiness, a.k.a. May He Rest in Peace