The Supreme Court struck down a crucial piece of the Voting Rights Act today and all (most of) the gays on the Internet are talking about is the possible affect of DOMA and Prop8 tomorrow.

Yes, the right to marry is an important one for families in this country, and yes, tomorrow’s decisions will affect many people throughout the country, but I am so tired of the gay rights being seen as a single issue movement. 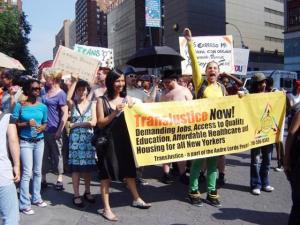 There are so many more things beyond gay marriage for which we need to rally.

Yes, I know, marriage equality is viewed by some as a stepping stone to full equality, but full equality for whom? I can still get fired in multiple states for being queer, many trans* people are still beaten and killed every year, housing discrimination against queer people is rampant, a shocking percentage of queer kids face physical harassment in schools, many queers are homeless and queer people still have horrific times finding safe, affordable health care options.

Where are our big multi-million dollar campaigns for these issues? 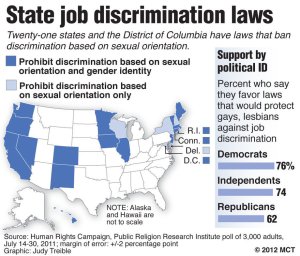 When did we forget about ENDA?

The gay marriage debate often equates itself to the civil rights movement, even adopting the slogan “gay is the new black.” Yet, gay isn’t the new black. Gay is gay and black is black, and while they have overlap, each minority comes with its own prejudices and privileges. 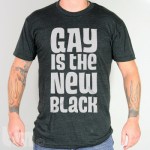 There is, however, a lot of overlap in the struggle of all minorities in the United States and one of those important areas is voting rights. 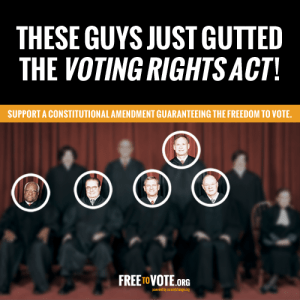 I’m not going to get into the legal nitty-gritty of what all happened with the voting rights act today because you can read it in the New York Times and they do it better than I could, but the jist is this: there is no longer federal oversight on counties with a history of gerrymandering (drawing voting lines to exclude and dilute certain voting groups) and enacting laws and procedures that inhibit or prohibit certain groups from voting.

While historically those groups are black voters, any other minority could easily be affected by gerrymandering.

Then they did the same to Valencia Street. The effect would be that LGBT people in those districts would be such a minority, their voice would never be heard.

This happens ALL THE TIME in the South. And North. And East and West and MidWest and pretty much all over the United States.

It happens in California too. Odd-shaped districting lines for the CA Senate were brought up as evidence of gerrymandering in a recent case.

Districting lines are such a hotly contested and important issue that we dedicated a few days to gerrymandering in my Constitutional Law class. That’s a lot of time in law school. That’s how important these provisions protecting minorities from gerrymandering are.

Think this law won’t change much? It already has.

Within two hours of the Supreme Court’s decision on the Voting Rights Act, Greg Abbott, the attorney general for the state of Texas, announced that a voter identification law that was blocked last year by the Justice Department would go into effect. – New York Times

So while tomorrow’s DOMA and Prop 8 decisions are monumental, remember in all of the hoopla around gay marriage that there are many other fundamental rights at high risk in this country as well.

Lauren Marie Fleming is a writer, speaker and motivator known for her intimate, informative and often hilarious look at sex, relationships and body-image. Lauren runs the critically-acclaimed QueerieBradshaw.com blog, writes for major news sources including VICE, Nerve, Huffington Post and Curve, and is the author of her memoir Losing It: My Life as a Sex Blogger. In 2013, Lauren founded Frisky Feminist Press (FriskyFeminist.com) as a way to enhance conversations about sexuality through educational guides, online classes and entertaining publications. A law school graduate, Lauren has spoken all over the United States and is internationally recognized for her dynamic, engaging style. In everything she does, Lauren’s goal is to educate, remove stigmas and encourage people to achieve their desires.
View all posts by Queerie Bradshaw →
This entry was posted in Alternative Families, Essays, Featured, Headline, Legal Issues/ The Law, LGBT/Queer Politics, Off Our Chests, Opinions, Politics, Racial Politics, Trans/Genderqueer/Gender Non-conformity and tagged DOMA, feature, featured, feelings, feminist, law, legal analysis, politics, Prop 8, queer, race, SCOTUS, Supreme Court, Voting Rights Act, VRA. Bookmark the permalink.