I hope you picked up on the sarcastic tone of the title above. I guess I’m not surprised at the fact that this is even considered “news” due to the lack of respect of intelligent women in this man-made world. Marissa Mayer is not some big-shot celebrity, but after the announcement of her high-profile job she just landed and her first pregnancy, she probably will be. It was hard to enjoy the awesome news of this powerful woman landing the CEO position of one of the biggest corporations. It was hard to enjoy because it was immediately followed with, “Oh, and by the way, she’s pregnant.” And here came all the questions of “What is she going to do now?” “What does this mean for Yahoo?” “How is this going to work?”

I think the fact that these questions are being asked proves how far behind women still are in the work force. I was very impressed at how Mayer handled herself. It was reported she told Yahoo about her pregnancy before accepting the job offer and Yahoo didn’t even consider it as part of their decision to choose her. It was ethical of her to announce her pregnancy, but not legally required since it’s illegal to discriminate pregnant women interviewing for a job. 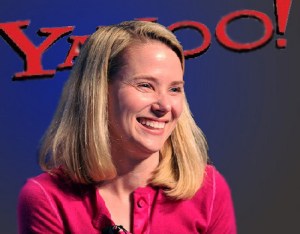 I believe Mayer’s experience with Google and the fact that she beat out front-runner acting Chief Executive Ross Levinshon for the Yahoo CEO position proves that not only is she well qualified to handle the job, but will be able to handle motherhood as well. Climbing to the top position she is in now should impress doubters, not question whether or not her pregnancy would negatively affect her new job. This could lead to many positive things for women in the work force. It could set a positive example to how something as natural as giving life does not hinder to the career she chose. It could also set a positive example to other corporations seeing as Yahoo was confident enough to trust their decision on hiring Mayer.

I read a lot of negative comments on Mayer’s decision to work throughout her maternity leave and how some women are against it because it might negatively affect them if they choose to not work throughout their maternity leave. I think what Mayer’s is trying to say here is that she can do her job as well as handle motherhood. It doesn’t have to mean that just because she decides to work throughout her maternity leave, that other woman should also. Mayer is making history by taking on this position and could influence the current policies on maternity leave for women. With the exception of a few states, the U.S. does not provide paid leave for pregnant women nationally. Instead, the Family and Medical leave act provides 12 weeks of job-protected leave.

I refuse to look at Mayer’s news as a negative thing. I think she’s going to be pulled in two different directions. One, being able to prove she can do her job with the arrival of her first child. And two, helping the workforce understand that pregnant women everywhere do need and deserve their maternity leave. Pregnant women shouldn’t feel they have to apologize for being pregnant. It really fucking sucks to think that a woman can go from first choice to second choice in any job position if she is pregnant. Having a child is not a disability and it should never lower the value of work a pregnant woman can and will provide.

This entry was posted in Feminism, Off Our Chests, Opinions, People, Rants and tagged mariss mayer, pregnancy, working woman, yahoo. Bookmark the permalink.

One Response to Yahoo’s New CEO is Pregnant?! Gasp! What Now?!