Queerie Me: What To Wear For Public Sex

I saw that you’re doing a series on exhibitionism and public sex and I was wondering, what does one wear for public sex?

Ideally, you wear nothing, but I’m assuming that isn’t an option or you wouldn’t be asking me for floozy fashion advice. Because my Queerie Mes tends to start with the obvious, let’s just throw out there that skirts and dresses without anything under are always good choices, as are yoga pants, sweats and other loose fitting bottoms.

If I go to a sex party or a dungeon to play, I almost always wear an extremley low cut dress and fishnets with a hole cut in the crotch. Oh and cute shoes.

But that’s if you’re looking for the easy way out. If you want more of a challenge, or your public quickie wasn’t planned, there are ways to get around any article of clothing out there. I’ve fit my hand down quite a few tight pants in my life. To help with your dilemma, I thought I’d showcase some outfits I’ve worn when I’ve had sex in public, or at the very least had sex at home but didn’t take the clothes off beforehand. 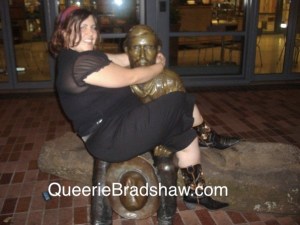 Option A – Capris and shorts: Notice the tightness of these pants and the mass of the cowboy boots. The combination made a quickie difficult, as I’d have to take the boots off to get the pants off. Capris help, though. That extra area between my calf and the boot gave me a space to tuck the pants down a bit so a hand could slip in and up. 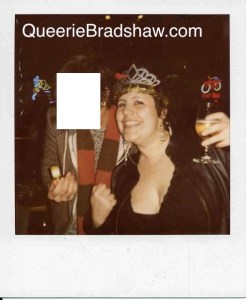 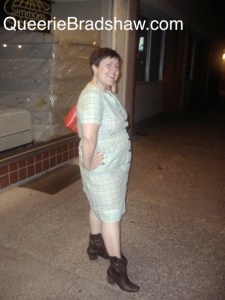 Option C  – Buttons: This outfit is a double whammy. Not only is it an easy access dress, but it buttons up from head to hoohah, allowing access to specific point only when needed. Buttons allow you to be more discreet if you choose. They also allow for immediately ripping open your outfit to expose yourself underneath, which is so hot. Just don’t rip too hard and destroy your dress. Unless that’s your thing, then destroy away. 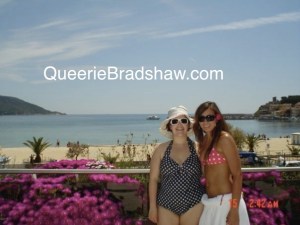 Option D – Bathing Suits: Don’t underestimate the power of a good bathing suit for public sex. It’s already skimpy and the material moves and bends fairly easy. Untie a top and *pop* out comes some tittes. Move a bottom over just a bit and full groinal access. Some of my best public sex has been had in a bathing suit, this suit above got me laid plenty of times before I had to let it go on to greener pastures. 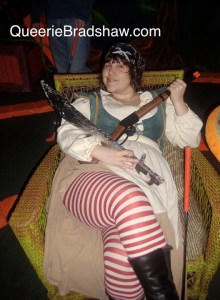 Option E – Costumes: I feel like you can get away with a lot when you’re dressed up. Not only do you tend to gain a new personality with maybe a bit less inhibitions, but you also get a wardrobe with a lot more accessibility options. For example, this outfit above has a massive large skirt that hides a hell of a lot more than the tight dresses I usually wear. I can be getting down under there and no one would be the wiser. The night this picture was taken …. well let’s just say there’s a reason I was MVP of my mini-golf league and it wasn’t my putting.

I hope these outfits provided you with at least an inspirational beginning to your foray into exhibitionism fashion. Feel free to send us pictures of outfits you’ve had sex in. We’d love to see them.

Lauren Marie Fleming is a writer, speaker and motivator known for her intimate, informative and often hilarious look at sex, relationships and body-image. Lauren runs the critically-acclaimed QueerieBradshaw.com blog, writes for major news sources including VICE, Nerve, Huffington Post and Curve, and is the author of her memoir Losing It: My Life as a Sex Blogger. In 2013, Lauren founded Frisky Feminist Press (FriskyFeminist.com) as a way to enhance conversations about sexuality through educational guides, online classes and entertaining publications. A law school graduate, Lauren has spoken all over the United States and is internationally recognized for her dynamic, engaging style. In everything she does, Lauren’s goal is to educate, remove stigmas and encourage people to achieve their desires.
View all posts by Queerie Bradshaw →
This entry was posted in Uncategorized and tagged exhibitionism, fashion, public nudity, public sex. Bookmark the permalink.

5 Responses to Queerie Me: What To Wear For Public Sex